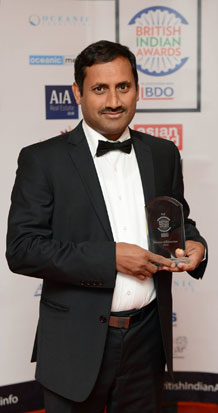 Professor Mallick standing with his award.

A University of Exeter professor and solar energy expert has been honoured for his services to education at a prestigious national awards ceremony organised by the UK’s Indian community.

Professor Tapas Mallick, Chair in Clean Technologies at the Environment and Sustainability Institute (ESI) at the University’s Penryn campus in Cornwall was presented with his trophy at the British Indian Awards, which recognise the commitment and hard work of those in the Indian community who have excelled in various fields and contributed to a better society.

Professor Mallick was selected from seven high profile finalists in the category of services to education at the recent event in Leicester for his work in clean energy research and pioneering projects that have brought electricity to rural Indian villagers.

As well as being academic lead in Renewable Energy in the College of Engineering, Mathematics and Physical Sciences, Professor Mallick is also visiting Professor of Mechanical Engineering in the Indian Institute of Technology in Madras. Over the last nine years he has secured research funding of over £6 million for strong and vibrant research collaboration with a range of international partners. He is author of more than 190 research articles, holds two patents on solar technology and has given over 80 academic presentations in 13 countries.

Professor Mallick, who was presented with his trophy by BBC radio presenter Kamlesh Purohit, said: “I was very surprised and extremely honoured to win this award, particularly as I was shortlisted alongside some very high profile contenders from other top UK universities. I was born and brought up in a remote village in India, where there was no electricity during my schooling, so being educated in a high profile educational institute, going on to work for one of the top universities in the UK and receiving this award have all been totally unexpected. I am grateful to all of those who are associated with this journey.”

The British Indian Awards, sponsored by accountancy firm BDO and now in their fourth year, recognise a wide range of achievements reflecting the important role that British Indians play in UK society including politics, business, the community and the arts and media as well as education. They were celebrated last week at the Athena event arena in Leicester and attended by a number of dignitaries and politicians.

Yasmin Mahmood, Operations Director of event organisers Oceanic Consulting, said: “The awards have been a platform to many British Indians who are continuously at the top of their chosen fields. Our aim is to ensure their hard work does not go un-noticed. Through the awards it has come to light just how many non- resident Indians as well as nationals have gained huge success in the UK.”