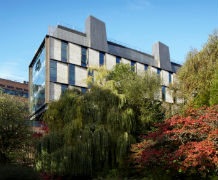 Sir Paul Nurse FRS and Christiane Nüsslein-Volhard ForMemRS, who separately won the Nobel Prize for Physiology or Medicine, will take centre-stage at the LSI’s Opening Symposium event, held on 5-6 July, 2017.

Sir Paul, a former president of the Royal Society and now Chief Executive of the Francis Crick Institute, was awarded a Nobel Prize in 2001 for his part in the discovery of protein molecules that control cell division.

German biologist Prof Nüsslein-Volhard, Emeritus Director of the Max Planck Institute for Entwicklungsbiologie, was awarded her Nobel Prize in 1995 for her discovery of the genes that control the development of animal embryos.

The event, hosted by the inaugural Director of the LSI, Professor Philip Ingham FRS, will provide a unique opportunity for distinguished guests to visit the £52 million new research facility, as well as meet the world-leading scientists who have joined the LSI.

The LSI is a truly inter-disciplinary endeavour that brings together clinician scientists with engineers, physicists, mathematicians, cell biologists, molecular geneticists and a whole string of other disciplines, pooling their expertise to address fundamental questions about the causes of disease.

Speaking ahead of the event, Professor Ingham said: “I am absolutely delighted that we have such eminent speakers attending this glittering event. To have not one but two Nobel Laureates gracing the opening of the LSI is testament to the global interest this visionary institute is already attracting.

“The LSI will pioneer innovative approaches to understanding diseases and how they can be better diagnosed, and this symposium will offer the ideal arena in which to showcase our exciting research and the talented scientists who do it.”