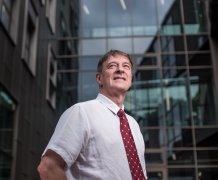 Research could give insight into genetic basis of the human muscle disease, myopathy

Pioneering research using the tropical zebrafish could provide new insights into the genetic basis of myopathy, a type of human muscle disease.

An international research team, led by Professor Philip Ingham FRS, inaugural Director of the University of Exeter’s Living Systems Institute – has taken the first steps in determining the central role a specific gene mutation in a poorly characterised human myopathy.

Myopathies are diseases that prevent muscle fibres from functioning properly, causing muscular weakness. At present, there is no single treatment for the disease, as it can develop via a number of different pathways.

One particular type is nemaline myopathy, which primarily affects skeletal muscles and can lead to sufferers experiencing severe feeding and swallowing difficulties as well as limited locomotor activity. Mutations in a specific gene, called MY018B, have recently been found to be present in people exhibiting symptoms of this disease, but the role these mutations play in muscle fibre integrity has until now been unclear.

In this new research, the Ingham team, based in Singapore and Exeter, has used high-resolution genetic analysis to create a zebrafish model of MYO18B malfunction; this research takes advantage of the remarkable similarity between the genomes of zebrafish and humans – which have more than 70 per cent of their genes in common.

The Singapore/Exeter team found that the MYO18B gene is active specifically in the ‘fast-twitch’ skeletal muscles of the zebrafish, typically used for powerful bursts of movement. Crucially, by studying fish in which the MYO18B gene is disrupted, they were able to show that it plays an essential role in the assembly of the bundles of actin and myosin filaments that give muscle fibres their contractile properties.

The team believe this new research offers a vital new step towards understanding the cause of myopathy in humans, which in turn could give rise to new, tailored treatments in the future.

The leading research is published in the scientific journal, Genetics.

Professor Ingham, said: “The identification of a MYO18B mutation in zebrafish provides the first direct evidence for its role in human myopathy and gives us a model in which to study the molecular basis of MYO18B function in muscle fibre integrity.”

A pioneer in the genetic analysis of development using fruit flies and zebrafish as model systems, Professor Ingham is internationally renowned for his contributions to several influential discoveries in the field of developmental biology over the last century.

This is the latest research by Professor Ingham that has revealed important links between the processes that underpin normal embryonic development and disease.

His co-discovery of the ‘Sonic Hedgehog’ gene, recognised as one of 24 centennial milestones in the field of developmental biology by Nature, in 2004, led directly to the establishment of a biotechnology company that helped develop the first drug to target non-melanoma skin cancer.

The research comes at the University of Exeter holds the official opening of the Living Systems Institute with an Opening Symposium event, from 5-6 July 2017.

The high-profile event, held at the University’s Streatham Campus marks the official opening of the LSI - a £52 million inter-disciplinary research facility designed to bring new, crucial insights into the causes and preventions of some of the most serious diseases facing humanity.

A Zebrafish Model for a Human Myopathy Associated with Mutation of the Unconventional Myosin MYO18B is published in Genetics.