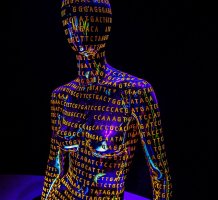 Pioneering new research could offer a fascinating new insight into how genomic information is read.

The human genome contains thousands of genes, but to get the information from a gene requires it to be copied.  This copying process - or transcription - involves a factory molecule called RNA polymerase that attaches to DNA at the beginning of a gene, copies the information in the gene into an RNA molecule before finally terminating the transcription process at the end of a gene.

As with any set of instructions, it is vital to start and stop in the correct place or else the message, in this case the RNA transcript, may make no sense or even cause harm.

A team of researchers, led by Dr Steven West from the University of Exeter’s Living Systems Institute, has taken a crucial step towards understanding how the transcription process stops – or is terminated.

The study is published in Genes & Development.

Dr West, an Associate Professor in Molecular Biology at the University of Exeter explained: “There have been two models used to explain this.  The first, called the allosteric model, suggests that the properties of RNA polymerase are changed at the ends of genes to cause it to stop.

“The second model is referred to as the torpedo model and proposes that, at the ends of genes, a molecular torpedo jumps onto the RNA and gives chase to the RNA polymerase bumping it off the DNA when it catches it.

“For this research, we used state-of-the-art gene editing approaches to identify the molecular torpedo as an important part of the process. It is extremely exciting to be able to look at this in more detail than before and to discover more of how the process works.”

Due to its fundamental importance, RNA transcription is intensively studied and the termination process has been debated over for decades.

In the new research, the scientists were able to eliminate key components of the mechanism in a very short space of time which gave a better picture of what was happening.  They combined this with a technique that reveals the exact position of RNA polymerase on all genes in the cell.

Dr West added: Many people will be aware of the therapeutic potential of gene editing technology.  However, it is also extremely useful as a biological tool to probe cellular processes as we have done.  When we used gene-editing to remove the molecular torpedo we were excited to see that the RNA polymerase took much longer to stop and that this problem was evident on most genes."

Xrn2 accelerates termination by RNA polymerase II, which is underpinned by CPSF73 activity is published in the journal Genes & Development.