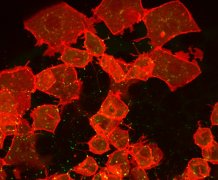 A team of international researchers, including experts from the University of Exeter’s Living Systems Institute, has identified how signalling pathways of Wnt proteins - which orchestrate and control many cell developmental processes – operate on both molecular and cellular levels.

Various mechanisms exist for cells to communicate with each other, and many are essential for development. This information exchange between cells is often based on signalling proteins that activate specific intracellular signalling cascades to control cell behaviour at a distance.

Wnt proteins are produced by a relatively small group of cells and orchestrate cell proliferation and differentiation, but also cell movement and polarity of the neighbouring cells.

However, one of the most crucial functions of the Wnt signalling is patterning of the body axis – which essentially helps determine where the head and tail should form in in a developing tissue.

However, the mechanism controlling Wnt cytonemes at the molecular level is currently unknown.

In the new study, his team explored the role of a key component of the PCP signalling pathway Vangl2 in zebrafish embryos.

In this project, Dr Lucy Brunt, identified that Wnt proteins activate the PCP pathway in a source cell in order to regulate cytoneme initiation and signal dissemination.

By activating this pathway via Vangl2, she induced the formation of long and branched cytonemes which reinforced distant Wnt signalling in the neighbouring cells.

Based on these data, fellow researcher Dr Kyle Wedgwood and his team developed a mathematical model to simulate this effect in a developing zebrafish egg, and predicted that the patterning of the body axis is massively altered.

“And the prediction was correct” explained Dr Brunt. “ We found that the formation of longer cytonemes in zebrafish larvae led to a strongly reduced head, and strikingly the forebrain tissue was missing completely.”

Together with cell biologists from the National University of Singapore, the scientists showed that the mechanism they described in zebrafish embryogenesis, operates also in different tissues, including  human cancer cells.

Professor Scholpp said "The exciting results of this multidisciplinary, multiscale project provides a step change in understanding how the Wnt signalling pathway operates at the molecular and cellular level in a living vertebrate animal.

"The data from this project will help us to understand the mechanisms involved in controlling normal Wnt signalling, in the future," he added. "We believe that the outcome will have fundamental implications for how we could manipulate Wnt signalling during disease states."