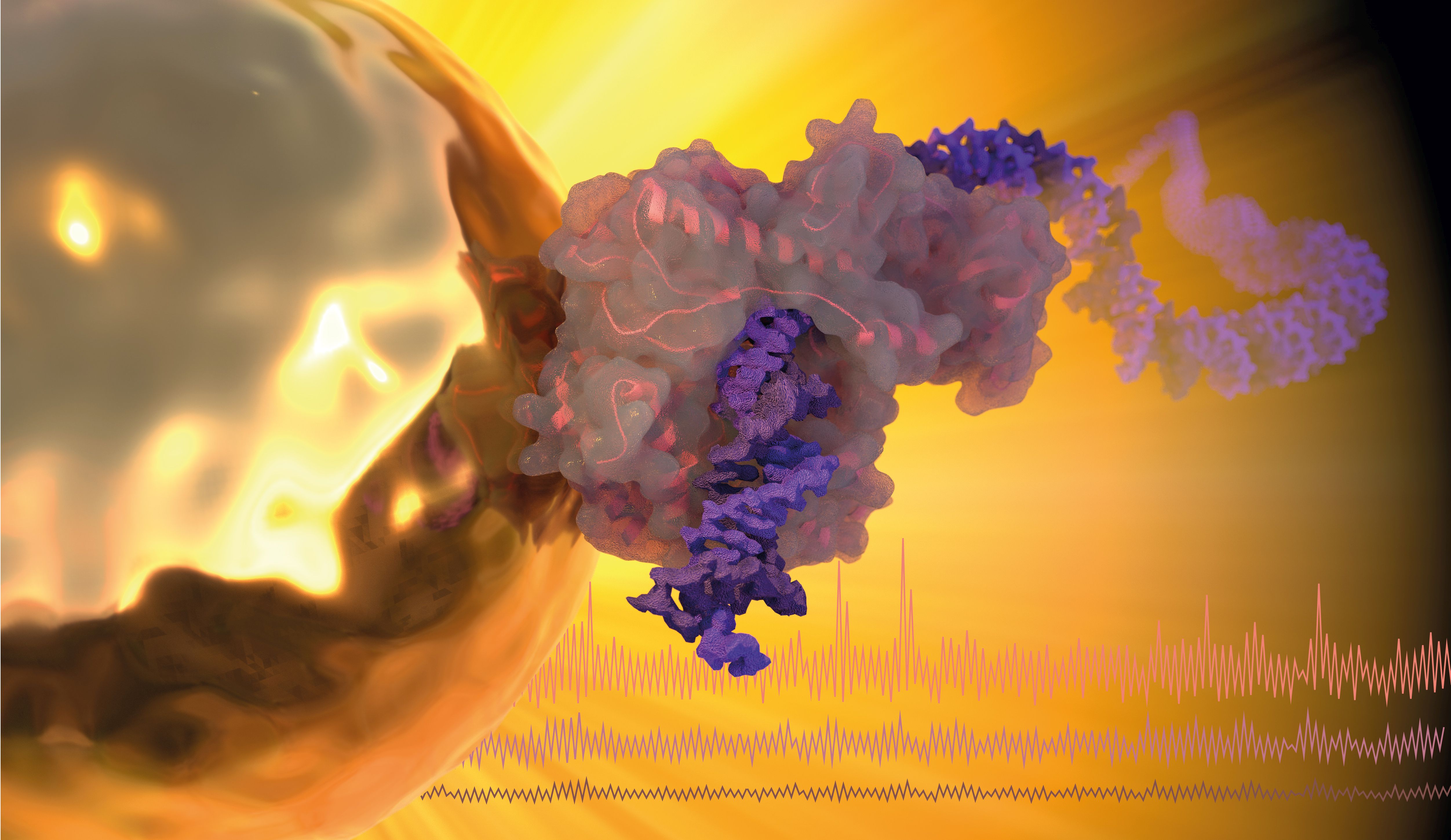 Building collaboration at the Physics of Life interface

The Molecular Mechanics Initiative is a cutting-edge research programme undertaken by Professor Frank Vollmer and his team, aiming to make a step change in how we detect, analyse and manipulate molecules at the ultimate single-molecule level.

This project, the Molecular Mechanics of Enzymes, funded by the UKRI Strategic Priorities Fund and led by Co-PIs Frank Vollmer and Jennifer Littlechild, is developing a novel nanosensing technique that can measure femto-Newton forces of single molecules for the first time. It is a truly interdisciplinary project involving researchers from Physics, Biosciences and Mathematics, as well as the Living Systems Institute itself, and the MRC Centre for Medical Mycology.

Recent developments in optical tweezers have led to the detection of the measurement of the forces exerted by single motor proteins. However, the forces exerted by enzymes during turnover have so far proved elusive due to the sensitivity limit required to detect the femto-Newton forces at work. This unique collaborative project will allow us, for the first time, to develop measurement technology - an optoplasmonic nanosensor - to detect these forces and to demonstrate the application of this technology for biosensors that measure the movement of enzymes to detect fungal biomarkers.

Measurement of forces and the resulting energy landscapes, combined with visualisation of enzyme movements, will allow us to develop more accurate models for molecular machines. The technology developed in this programme will not only sense forces exerted by enzymes, but allow us to manipulate the complex motions of active enzymes. Such control offers the possibility of making some conformational states of an enzyme more likely than others, and can be used to control enzymatic activity. Demonstrating this capability will prepare the ground for future manipulation and exploitation of synthetic biomolecular machinery and the design of enzymes for specific applications in the laboratory.

The final year of the project involves a case study to evaluate the diagnostic capabilities of a portable version of the sensor in a healthcare environment.

In the first year good progress has been made towards the overall project aims.

Target enzymes (examples, 3 Phosphoglycerate (PGK), two Transaminases, MalL, and Xog1Ca) have been cloned, expressed and purified for immobilisation onto the gold nanosensors.

Suitable surface immobilisation strategies have been identified. The first strategy uses the formation of a thiol-gold bond between a specifically introduced surface cysteine amino acid in a surface loop of the enzyme of interest. The second immobilisation strategy uses a Ni-NTA linker attached to the gold to capture over-expressed proteins which have a hexa-histidine tag introduced at their N or C termini. Enzyme activity assays based on spectrophotometric techniques have been developed for all of the target enzymes. We have also established that all of the enzymes are active after immobilisation onto the gold nanosensors. The first optical nanosensor signals for single-enzymes have been recorded for the enzyme 3 Phosphoglycerate kinase (PGK).

The first data analysis of sensor signals shows that they follow the ‘hinge-bending’ conformational change that is known to occur during PGK enzyme catalysis. The signals were obtained using a modified nanosensor setup that currently has approximately a micro-second time resolution. This resolution is high enough to follow the conformational motion of the enzymes in real time, and to identify different states of the enzymes including when and for how long these states are accessed during the catalytic cycle.

Preliminary nanosensor signal analysis indicates that it might be possible to assign molecular structure to the signals obtained which is a first step towards making molecular movies. To achieve this, the nanosensor signals are analysed together with X-ray crystallographic structures and molecular dynamics simulations. Where this data is not already available we are determining the structures of new complexes of the enzymes, with additional substrates and inhibitors, and combining these structures with molecular dynamics simulations.

The information obtained within the nanosensor signals are further scrutinized by the part of our team that works on the theoretical signal analysis. The team has started to develop signal analysis methods based on statistical mechanics and the application of fluctuation theorems. On the experimental side, the nanosensor setup has been modified with an MSquared laser for operating at different wavelengths. In the future, multi-wavelength nanosensing experiments will provide spatial information on protein conformational changes. The high information content of the multi-wavelength signals will allow for the development of a more advanced signal analysis methodology.

Sensor optimisation has progressed, with results obtained on the theoretical analysis of light fields around nanosensor structures such as nanorods and nanostars. Nanostars have been identified as the more sensitive nanostructure geometry. Nanostars will enable a higher application of the force onto single enzymes. Further physical mechanisms have been identified that might improve sensitivity and other performance characteristics of the nanosensors. We predict that fN forces can be applied at the tip of a nanostar to actuate conformational changes of enzymes. The magnitude of those forces depends on the light intensity. The next step is to demonstrate that enzyme activity can be modulated by light intensity levels. By developing force protocols, it will be possible to measure many aspects of the energy landscapes, and the forces that are accessed by the single enzyme during catalysis. We will use the force protocols to control and bias enzyme movements by applying forces and changes in the energy landscape, in an approach we call ‘dial-a-conformation’.

The part of the project that is focussed on biosensor development has started. The goal is to use enzymes and antibodies immobilised onto the gold nanosensors as biomarkers to detect Candida albicans infection. The team has identified C.albicans-specific enzymes such as Xog1, and antibodies that we will now use to develop the optical nanosensor biomarkers. This will most likely be complemented with an electrochemical approach to nanosensing on the gold.

Collaboration and inter-disciplinary working are at the heart of the Molecular Mechanics Initiative.