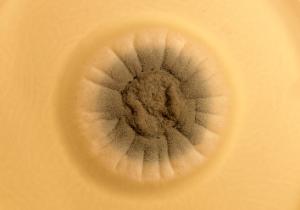 Aspergillus fumigatus, a fungus that plays a major role in composting and regeneration of organic matter in our world, but can also become pathogenic and deadly. Taken by Léonie Hampton of Still/Moving working in collaboration with Elaine Bignell’s Team at the MRC CMM.

Our Body is a Planet

The short film "Our Body is a Planet" is the result of the MRC Centre for Medical Mycology’s exploratory artist’s residency with Devon-based artist Léonie Hampton of Still/Moving, in partnership with Arts and Culture, University of Exeter.

“This residency has been a deeply inspiring and enriching experience. A blend of horror and beauty grew as I learnt from the stories and images about fungi that the scientists shared with me. The film is truly a collaborative outcome that tries to capture the journey I was taken on. Thank you to everyone who contributed their thoughts, time and work to make this film come alive. “ Léonie

This project was funded by the Medical Research Council Centre for Medical Mycology at the University of Exeter (MR/N006364/2) and the Wellcome Trust Institutional Strategic Support Award (WT105618MA).

The full film and post-screening panel discussion can be found at https://thefungalthreat.com/our-body-is-a-planet/