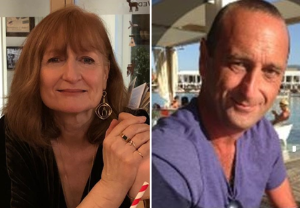 Profs. Elizabeth Johnson and Andy Borman appointed as Honorary Professors at the University of Exeter and the MRC CMM

Profs. Elizabeth Johnson and Andy Borman of the Public Health England’s UK National Mycology Reference Laboratory appointed as Honorary Professors at the University of Exeter and the MRC CMM.

Professor Elizabeth Johnson is a Consultant Clinical Scientist in Medical Mycology and the Director of Public Health England’s UK National Mycology Reference Laboratory, Bristol, UK. She has worked in the field of medical mycology since graduating and gained her PhD from Bristol University in 1986 whilst training as a Clinical Scientist. She has been a Consultant Clinical Scientist and the Director of the Public Health England (or its earlier iterations) National Mycology Reference Laboratory and curator of the National Collection of Pathogenic Fungi for the last 20 years. Her particular interests are in the areas of antifungal drugs, diagnosis of fungal infection and identification of pathogenic fungi and she enjoys teaching and disseminating knowledge in these areas.

As well as running the clinical service Elizabeth has published over 150 primary research papers and numerous additional book chapters and review articles on fungal infections and their management, antifungal susceptibility testing and resistance. She is also the co-author of two books which are both on their second editions: “Identification of Pathogenic Fungi” and “The Pocket Guide to Fungal Infection”, which are widely used reference texts in the field of medical mycology. She is a former President of the British Society for Medical Mycology, a Clinical Scientist assessor for ACB, has served as an editor for the Journal of Antimicrobial Chemotherapy, an advisor for the Clinical and Laboratory Standards Institute (CLSI) and is a mycology section editor for the Manual of Clinical Microbiology.

She has run a residential course on the Identification of Pathogenic Fungi for 40 - 50 participants annually for the last 20 years which attracts delegates from around the world, and has run and participated in the delivery of courses, conferences and lecture tours in many countries.

Professor Andy Borman is the Deputy Director of Public Health England’s UK National Mycology Reference Laboratory since 2003 and also an Honorary Professor at the College of Life and Environmental Sciences, University of Exeter, UK. His research interests include the epidemiology of emerging fungal pathogens and neglected tropical diseases caused by filamentous fungi, the diagnosis and management of fungal infections, the molecular and proteomic identification of pathogenic fungi, fungi associated with cystic fibrosis, and fungal taxonomy, phylogenetics and nomenclature.

Prior to joining the Mycology Reference Laboratory, Prof Borman was a senior research scientist and then deputy director of a research unit in the Departments of Retrovirology and Virology at the Pasteur Institute, Paris, France from 1992 until 2003.

Educated at the Universities of Manchester (B.Sc.) and Cambridge (Ph.D), Andy has published over 120 peer-reviewed papers and book chapters. He serves as a reviewer for a wide range of scientific journals, was previously on the editorial boards of the Journal of Clinical Microbiology and Mycopathologia and is a current editor for Medical Mycology.

He is a member of the American Society for Microbiology and the British Society for Medical Mycology and several working groups of the International Society of Human and Animal Mycology (ISHAM). He also served as co-convenor for the ISHAM working group on “Fungal respiratory infections in cystic fibrosis” from 2009-2017.