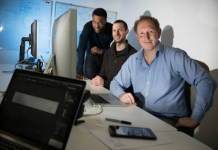 Founded in 2011 by electrical engineer John Cass, Revel Innovation specialises in the development of bespoke software and cloud based business applications.

Having built a successful product portfolio and recruited a team of developers based around the world, John relocated his business and his family to Exeter earlier this year.

Before moving to Malawi, entrepreneur John worked in engineering and software development in London. John and his family moved to Malawi in 2011 where John set up his own business. After five years, they decided to return home to the UK.

John explained: “We made the decision to move back but we didn’t want to live in London again. We wanted to live near the countryside where our kids could benefit from everything it has to offer, but I also really wanted to be near a forward-thinking city where I could continue to grow my business and find the right employees to help build our product portfolio.

He continued: “We decided on Exeter and almost straight away I came across the Science Park. Initially, whilst going through the transition from being based in Malawi to basing ourselves back here I worked in the hot-desking space, but we opened our head office as soon as we could.”

“Our time in Malawi was incredible; we made new business partnerships, identified and developed new products and got a real understanding of the people and their needs. But living in Africa definitely had its setbacks in regards to growing a business further, for example recruiting the right people was really difficult in Malawi.”

Whilst living in Malawi, John built relationships within the local community and witnessed the growth in the use of phones, smart phones and technology, and was excited by the changes the technology could make to people’s everyday lives.

John and his team worked closely with the people in Malawi to develop two software solutions that have significantly improved educational and working conditions.

The first, Smallholdr, was developed for the farming community as John recognised the need for reliable data capture and joined up communications between smallholder farmers and agri-businesses.

With more than 70 per cent Africa’s population involved in farming, either for profit or for self-sufficiency, Smallholdr is a piece of software that allows agri-businesses to manage and support smallholder farmers through a smartphone app and management platform.

The second product is a piece of software funded and supported by the international charity Save the Children. The software allows teachers in rural schools to access lesson plans and educational materials through an app on a smartphone. It has been specially designed to give teachers more control and flexibility in their lessons, and has significantly improved lesson efficiency, engagement and increased attendance.

John said: “Only a month in and we can already see how beneficial being based in the UK and at the Science Park will be to our business growth. We’ve already recruited a new member of staff who I met in the Science Park’s hot-desking facilities. We are a ‘for-profit’ company but we also want to make a difference in the world and see our work make a positive impact. To achieve that, we need to build on our successes so that we can continue to develop innovative solutions.

He continued: “Our team is now based across the world in Malawi, Ethiopia and the Philippines but the majority of us are based at the Science Park. It’s fantastic being located so close to a top university, not only are there talented graduates to tap into but we are also looking into the opportunity to run internships.”

Joe Pearce, Business Support Manager of the Exeter Science Park Centre, said: “Having lived and worked all over the world, John and his family could have chosen anywhere, we are delighted that they chose Exeter, and specifically the Science Park. An important aspect of the Centre is the business support we offer, and as part of this we were very pleased to have Revel take part in Venturefest earlier in October, where they were able to present their innovative and world changing technology to an audience of investors. John and the Revel team are a fantastic addition to the Science Park community and we look forward to seeing what they achieve next.”

The building of the Science Park Centre has been made possible with shareholder equity from Devon County Council, East Devon District Council, Exeter City Council, the University of Exeter; the Heart of the South West LEP which committed £4.5m loan from the Growing Places Fund; and a £1 million grant from the Regional Growth Fund.

To find out more about Revel Innovation visit www.revel.org.uk or follow the team on LinkedIn.