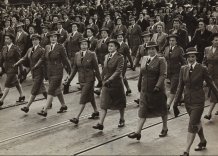 The aim was for the programmes to challenge Nazi ideology

The BBC broadcast propaganda, news and entertainment programmes into Nazi Germany designed to create fear and outrage and stir up revolutionary energy amongst women, a major new study shows.

The corporation’s German Service output was carefully designed to remind female listeners of wartime hardships and the impact of Hitler’s brutal regime on ordinary citizens.

Programmes documented and fed women’s worries, in the hope that this would weaken rather than strengthen female listeners’ resolve to support Hitler’s war.

Programmes for women covered infotainment, serious war reporting and a scaremongering. They ranged from comedy and musical programmes to in-depth, eyewitness descriptions of mass killings in concentration camps. They were designed to be much more varied than broadcasting peogrammes for women provided by the Nazis.

News bulletins for German women regularly contained disturbing reports about the effects of a prolonged war. This included stories about the German textile industry unable to cope with the demands for mourning clothesor desperate mothers in Belgium seizing food for their children that was due to be sent to Germany.

The BBC German Service was set up in 1938 at the time of the Munich crisis when another world war became increasingly likely. In spite of Nazi attempts to jam programmes and harshly punish listeners in Germany for tuning in to so-called enemy broadcasts, it soon became the most significant source of information for people living under Nazi rule. At first, German-language broadcasting was limited, but the number of programmes transmitted to Germany grew dramatically during World War II to include news bulletins, features, political satire, songs and music as well as specialist programmes for the navy, for women, for the army or for workers.

Professor Vike Martina Plock from the Department of English at the University of Exeter has been examining archival records in the BBC Written Archives Centre in Caversham, the National Archives and other radio-related archives in the UK and Germany. Her research is outlined in a new book, The BBC German Service during the Second World War: Broadcasting to the Enemy .

Professor Plock said: “It is likely those planning these programmes took note of the sort of radio output with which female listeners in Germany had become familiar through years of exposure to Nazi propaganda.BBC programmes needed to differ from this Nazi radio diet but departing too much and too quickly from what women in Germany were used to hearing on the radio might have been counterproductive, alienating rather than winning over the intended target audience.

“The aim was for the programmes to challenge Nazi ideology in two ways – to create frustration, fear and resentment through a focus household worries, and to tell people about Nazi war crimes and the economic and moral bankruptcy of the Hitler regime.

“There were intellectual and politically informative broadcasts designed to remind German women they were autonomous individuals who could use a – hopefully - newly rediscovered political consciousness to sabotage the Nazi state.

“There were also non-political programmes designed to be a distraction, to offer German housewives a moment of respite from their busy lives as homemakers whose tasks had been made difficult by war-related shortages.”

By January 1942 the names of prisoners of war and dead German soldiers were read out on a regular basis. Programmes also described conditions in British prisoner of war camps in great detail. At other times female listeners were given advice on what do to during air raids.

In February 1941 a new thirty minute afternoon musical programme was introduced. Aus der freien Welt [From the Free World] played gramophone records with tunes that were forbidden in Nazi Germany. Short “news flashes” interrupted the playback of musical pieces but the compere generally encouraged listeners to join him “in forgetting the war for a moment.” Aus der freien Welt introduced them to new composers and artists or brought them news about Hollywood films and starlets. Friday sessions were reserved for playing music that had been popularised by US films. As the compere pointed out in a February 1941 transmission, all these tunes and voices, faces and stories were “no longer granted behind your brown wall.”

From November 1941 to May 1942, the German Service also transmitted the Feature Die Familie Knöterich [The Knöterich Family], which had a married couple, “Berthold Knöterich and his wife Hertha, née Brandig,” discuss the harsh impact of the Nazi-orchestrated war on ordinary people’s lives. The domestic setting was an attempt to make German women forget the fact that they were listening to enemy propaganda. Many women living in Nazi Germany would never have dared to speak openly about the issues addressed in this programme.

One programme broadcast on 6 March 1941 reconstructed a day in the life of a German housewife who is encouraged by her maid to take out powder, lipstick, rouge and an old evening dress, all of these were items that the Nazis no longer permitted women to use or wear. Her husband, a functionary in the SS, comes home unexpectedly and reprimands her sharply for her behaviour. Fearing denunciation, he asks his wife if the children or the maid have seen her “made up like a woman from the street.”

Another programme in October 1941 mocked the Ferntrauung [marriage by proxy] which could be arranged for members of the Wehrmacht who had inadvertently fathered a child but could not be present at a wedding. The arrangement was colloquially referred to as Stahlhelmtrauung
[steel helmet wedding] because the groom was represented by a helmet and became popular when more German soldiers were forced to remain in the field or had been captured. In the short, dramatised sketch broadcast by the BBC the husband in question was already dead by the time the bride said her wedding vows, emphasing how the Nazi system had reduced the emotional experience of matrimony to a purely functional transaction in service of the state..

The BBC propaganda programmes for women in Nazi Germany had originally been designed to be light-hearted distractions for bored housewives. Over the course of the war, they diversified and acknowledged that women were independently thinking individuals whose interests went beyond homemaking and the family.