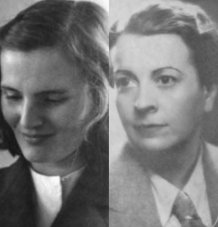 The close bond between two of Spain’s finest female writers will be brought to live in a major new London stage show.

Elena Fortún and Carmen Laforet produced some of the country’s best-known literature. Carmen was struggling with her roles as new mother and celebrated writer and Elena was in her final years when they wrote to each other between 1947 and 1952.

Elena’s work had inspired Carmen and the letters show the literary and intellectual influence between pre- and post- civil war female-authored and feminist writing.

The play at the Cervantes Theatre in Southwark, will feature actresses Paula Rodríguez and Elena Sanz reading the letters, as well as newly composed music.

Carmen’s most famous work is Nada which describes her experience of the misery of post-war Spain. It tells the story of a young girl who goes to Barcelona to find a chaotic and stifling atmosphere and intellectual emptiness. It was highly regarded when it was published and won the first edition of the prestigious Nadal Prize, but Carmen never again published anything as influential, and retired from public life. Nada continues to be one of the most widely read European novels of the 20th century.

Elena Fortún, who lived between 1886 and 1952, created the best-known character in Spanish children’s fiction: Celia. The Celia and Her World saga started at the end of the roaring twenties. The adventures of the girl from Madrid who wanted to become a writer is an account of the most difficult years of the Spanish twentieth century. The series defied Francoist censorship.

Professor Nuria Capdevila-Arguelles was the first academic to be given permission by Carmen’s five children to examine all the letters, which have been published in Spain by Foundation Banco Santander. Through her work with other private archives and with Elena Fortún’s estate, she has told the story of the friendship and intellectual exchange between Elena and other female writers.

Professor Capdevila-Arguelles’s research examines forgotten female writers, actresses and painters exiled from the canon of Spanish culture by the civil war and the dictatorship. She has been responsible for the publication of new, uncensored, critical editions of Celia books written by Elena while she was in Argentina, a volume of her unpublished works and letters and an autobiography in which Fortún writes about her gradual understanding of her homosexuality.

The London stage production is inspired by Cartasvivas, a series of films produced by experts, filmmakers, university students and leading actors about women in pre-Franco Spain, and how they understood discrimination and gender violence, and their struggles to have a voice, as well as their thoughts on their sexuality or motherhood.

Professor Capdevila-Arguelles said: “It is extremely exciting to be able to put on this production in London to tell the story of these amazing women in the UK. The letters are an incredible record of their working methods and inspirations, as well as their bond, their networks and the circumstances that made them either write or be silent. Their letters lead us into two minds and a feminist world we, as Spanish women, want and need to know about. This dramatic project, designed to continue in the future with other archives and other writers, is about our historical memory, about not hiding it and about bringing it to the light for audiences that know and love Spanish culture.”

Paula Paz said: "Bringing the life and work of Carmen Laforet and Elena Fortún to the stage is an act of love towards their work and a recognition to these two women, key figures of the Spanish literature of the 20th century. Their letters are testimony of their talent, their influence, their struggles and their fascinating lives and I am delighted that Fortún and Laforet can take centre stage at the Cervantes Theatre in London.”

The performances will take place from 19 to 21 May each evening at 7:30pm. BUY TICKETS