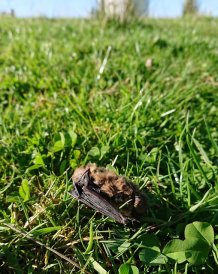 A dead pipistrelle at a wind farm. Credit Fiona Mathews

One of the most abundant bats in Europe may be attracted to wind turbines, a new study shows.

The activity of common pipistrelle bats was monitored at 23 British wind farms and similar "control" locations close by without turbines.

Activity was around a third higher at turbines than at control locations, and two thirds of occasions with high activity were recorded at turbines rather than the controls.

The reasons for this are not clear. Possibilities include attraction to the turbines themselves, or the presence of more of the bats' insect prey around turbines.

“Either way it means the risk of fatality at wind turbines is increased, and probably explains the high fatalities of common pipistrelle bats seen at some wind farms across Europe,” said Dr Suzanne Richardson.

Common pipistrelle bats account for more than half of all bat fatalities at turbine sites in Europe.

"We know bats are killed by turbines worldwide, and reducing these fatalities is essential to ensuring a global increase in wind energy with minimal impact on bats," said Professor David Hosken, of the University of Exeter.

"To do that, we need to understand whether bats are actively attracted to, indifferent to, or repelled by, the turbines at large wind-energy installations.

"Our findings help explain why Environmental Impact Assessments conducted before the installation of turbines are poor predictors of actual fatality rates.

"Turbines are generally built in areas where bat activity is thought to be low, but this may not be an effective strategy if bats are attracted once turbines are built.

"Ongoing monitoring is required, and measures such as minimising blade rotation in periods of high collision risk are likely to be the most effective way to reduce fatalities."

The study also monitored soprano pipistrelle bats, finding no conclusive evidence that this species is more active around turbines.

Professor Fiona Mathews of the University of Sussex, who led the research, said: “Bat activity at wind farms is very variable.

"During periods of high wind speed, when most energy is generated, bat activity is low and so there is little risk to bats.

"In contrast, there can be high activity at turbines on nights with light winds and warm temperatures.

"Most of the attraction to turbines appears to be happening on these high activity nights.

“We have worked with the Statutory Nature Conservation Organisations and industry to produce guidance to help minimise the risks to bats.

"These include stopping blades rotating when no energy is being produced (‘idling’). This is a win-win situation as little electricity generation is lost during these periods.”

The paper, published in the journal Scientific Reports, is entitled: "Peaks in bat activity at turbines and the implications for mitigating the impact of wind energy developments on bats."