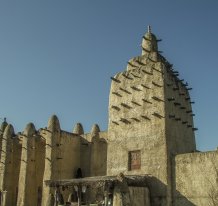 The iconic earthen architecture of Mali

Decolonise research to save heritage threatened by climate change

Climate change threatens to destroy invaluable heritage sites and traditions in marginalised countries – but empowering local people is key to adaptation, according to a new study.

Traditional ways of life in Amazonia and the Pacific Island States, ancient Roman coastal cities such as Tipasa in Algeria, the iconic earthen architecture of Mali – including the masonic craftmanship passed down through generations to maintain it – all face the threat of loss and damage from climate change because heritage research and funding haven’t historically been prioritised in these areas.

Locally led research and more equitable research funding are needed to address the true potential loss and damage to heritage from climate change, researchers have said.

Dr Nadia Khalaf, from the University of Exeter, who was part of the research team, said: “There is a geographical bias in climate change heritage research where we see hundreds of protected and inscribed sites in higher income countries, while lower income countries, many of them former colonies, see far fewer. To create equality and protect heritage from climate change we must address this imbalance.”

As heritage includes all the inherited traditions, monuments, objects, places and culture, as well as contemporary activities, knowledge, meanings and behaviours that are drawn from them, the study says it is vital that research and knowledge generation becomes more inclusive, equitable and diverse.

Climate change is an increasing focus of heritage research across Europe and North America, including identification of site-specific adaptation options for heritage preservation.

In contrast, climate change research in other regions is limited by systemic gaps in access to funding and its associated knowledge generation, which act to reinforce historical colonial structures deeply embedded in heritage management.

The researchers said decolonial approaches are not yet widely established in climate change-heritage scholarship and practice, and decolonial efforts can begin to address systemic inequities, recognise the breadth of heritage, and strengthen adaptation action globally.

Climate adaptation funding for many vulnerable low to middle income nations is heavily dependent on international aid organisations that are commonly located in high-income countries (HIC). This inevitably leads to an unequal balance in the types of heritage earmarked for research or development, with a bias toward heritage valued by those living in HICs while commonly side-lining pre-colonial heritage.

Moreover, belief systems or other forms of intangible heritage historically haven’t been deemed as valuable to Western researchers and funders as places or things, such as temples or statues.

Research agendas and funding, along with the policy agendas to which they are linked, need to be decentred from the HICs. Priorities for research and practice should be informed by Indigenous and local communities and should integrate their values, preferences and judgements with climate change risk and vulnerability assessments, the study suggests.

Specific efforts also will be required to train scholars to accommodate multiple knowledges and world views in the formulation of research questions and the co-creation of solutions. Collaborating with and mentoring scholars from LMICs will create the next generation of climate change heritage scholars, while aiming to make research findings and data more accessible to them.