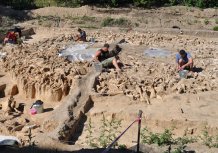 Mysterious bone circles made from the remains of dozens of mammoths have revealed clues about how ancient communities survived Europe’s ice age.

About 70 of these structures are known to exist in Ukraine and the west Russian Plain.

New analysis shows the bones at one site are more than 20,000 years old, making it the oldest such circular structure built by humans discovered in the region. The bones were likely sourced from animal graveyards, and the circle was then hidden by sediment and is now a foot below current surface level.

The majority of the bones found at the site investigated, in the Russian Plains, are from mammoths. A total of 51 lower jaws and 64 individual mammoth skulls were used to construct the walls of the 30ft by 30ft structure and scattered across its interior. Small numbers of reindeer, horse, bear, wolf, red fox and arctic fox bones were also found.

Archaeologists have also found for the first time the remains of charred wood and other soft non-woody plant remains within the circular structure, situated just outside the modern village of Kostenki, about 500km south of Moscow.  This shows people were burning wood as well as bones for fuel, and the communities who lived there had learned where to forage for edible plants during the Ice Age. The plants could also have been used for poisons, medicines, string or fabric. More than 50 small charred seeds were also found – the remains of plants growing locally or possibly food remains from cooking and eating.

Dr Alexander Pryor, from the University of Exeter, who led the study, said: “Kostenki 11 represents a rare example of Palaeolithic hunter-gatherers living on in this harsh environment. What might have brought ancient hunter gatherers to this site? One possibility is that the mammoths and humans could have come to the area on masse because it had a natural spring that would have provided unfrozen liquid water throughout the winter – rare in this period of extreme cold.

“These finds shed new light on the purpose of these mysterious sites. Archaeology is showing us more about how our ancestors survived in this desperately cold and hostile environment at the climax of the last ice age. Most other places at similar latitudes in Europe had been abandoned by this time, but these groups had managed to adapt to find food, shelter and water.”

The last ice age, which swept northern Europe between 75-18,000 years ago, reached its coldest and most severe stage at around 23-18,000 years ago, just as the site at Kostenki 11 was being built. Climate reconstructions indicate at the time summers were short and cool and winters were long and cold, with temperatures around -20 degrees Celsius or colder. Most communities left the region, likely because of lack of prey to hunt and plant resources they depended upon for survival. Eventually the bone circles were also abandoned as the climate continued to get colder and more inhospitable.

Previously archaeologists have assumed that the circular mammoth bone structures were used as dwellings, occupied for many months at a time. The new study suggests this may not always have been the case as the intensity of activity at Kostenki 11 appears less than would be expected from a long term base camp site.

Other finds include more than 300 tiny stone and flint chips just a few millimetres in size, debris left behind the site’s inhabitants as they knapped stone nodules into sharp tools with distinctive shapes used for tasks such as butchering animals and scraping hides.