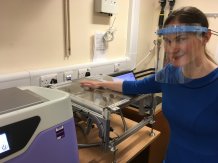 The in vivo THz imaging systems set up for skin imaging in Professor Emma MacPherson's (pictured) lab at the University of Warwick.

New technology that will marry probes that can detect cancer tumours through the skin with high-precision robotic surgery is to be developed for use in hospital settings for the first time.

The Terabotics project, which includes experts from the University of Exeter, will use probes that use terahertz radiation, or T-rays, to scan for tumours under the skin while medical-grade surgical robots will be adapted to use these scans to guide them in removing tumours in skin and colorectal cancer patients more precisely.

If successful, the researchers hope it could lead to real-time diagnosis for cancer patients, shorter waiting periods for cancer surgery, and more comprehensive removal of tumours with reduced need for follow-up surgery.

As well as assessing how effective T-ray technology is in diagnosing cancers compared to standard care, the project aims to incorporate the technology into surgical robots to guide them more accurately when detecting tumours during colonoscopy and removing them during surgery.

Professor Euan Hendry, co-investigator and from the University of Exeter said: “We will be using our pioneering THz imaging technologies, developed right here in Exeter, to “see” cancerous tissue. Once incorporated into robotic probes, the idea is that this should make tumours much easier to find, measure and remove. Together with our colleagues in Warwick and Leeds, we are hopeful that this new direction could make a real difference.”

Principal Investigator Professor Emma Pickwell-MacPherson, from the University of Warwick Department of Physics, said: “What we will be testing is our hypothesis that we are able to detect a buried or hidden tumour. We think our terahertz probe will be able to detect those through looking at the transient response of the skin.

“Somebody might already be diagnosed with cancer but the actual extent of that cancer may not be known. For example, in skin cancer patients, the THz probe will image the visible tumour and the surrounding area to better determine the extent of the tumour that is beneath the surface. This will enable the whole tumour to be removed in one go, rather than incrementally. In turn, this enables better planning for reconstruction and speeds up the procedure.”

Initially, the researchers will focus on adapting the T-ray probes to work with the surgical robots, miniaturisation of the technology and refining the design to provide more diagnostic parameters.

Later stages of the project will involve trialling the technology with patients with a known or suspected cancer. Those attending cancer services at University Hospitals Coventry and Warwickshire will be offered the opportunity to participate alongside their routine care. Colorectal cancer patients will be seen at the University of Leeds, where an endoscopic probe is being developed specifically to examine the colon. Just like our skin, the colon is an epithelial lining and could potentially be scanned by T-rays in the same way.

Professor Nick Stone, co-investigator and from the University of Exeter said: “Utilising this approach we expect to provide a real time image of tissue pathology, based upon imaging its changing composition and structure. This will enable clinicians to speed up decision making and hopefully reduce the need for further operations."

Professor Pietro Valdastri of the University of Leeds said: “Robotics is increasingly used in the operating theatre as it brings superior accuracy and unload some of the burden of the procedure from the surgeon. At Leeds, we are developing the next generation of surgical robots to detect colorectal cancer earlier and remove it more effectively. Adding THz perception capabilities to our robots is a new exciting avenue of research that has the potential to improve cancer patient quality of life in the next 5 to 10 years.”