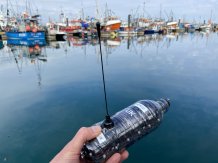 On the penultimate day of COP26, scientists have deployed plastic pollution tracking devices into the ocean around Scotland.

The devices will help scientists understand how plastic bottles move in the ocean and their interaction with climate change impacts, wildlife and weather patterns.

Designed to mimic a single-use plastic drinks bottle, the devices will respond to currents and winds as real bottles do.

Stage one of the project launched on World Ocean Day (8 June) during the G7 in Cornwall, and has already seen seven devices travel hundreds of miles over the past five months.

A recent study released by ZSL and Bangor University revealed links between the global climate crisis and plastic pollution, including the impact of extreme weather worsening the distribution of microplastics into pristine and remote areas.

With all eyes on COP26 nearing its completion in Glasgow, the four devices have been named “Heat”, “Acidity” “Deoxygenation” and "Pollution" to draw attention to the need to adequately address these ocean crises in tandem and to ensure that a recurring ocean climate dialogue is fundamental to future COPs.

Professor Heather Koldewey, of ZSL and the University of Exeter, lead scientist on the project and Director of the #OneLess campaign, said: "Through our research we’ve seen that plastic and climate change are fundamentally and intrinsically linked.

"Plastic is made from fossil fuels, generating greenhouse gasses at every step of its life cycle and the impact of both plastic pollution and climate change are both prevalent around the world.

"These crises are truly interconnected. There is only one ocean and by tracking the flow of plastics we are trying to demonstrate the connectedness and the wide-reaching impact that humans are having on our planet.

"There is an urgency to acknowledge that the climate crisis is the ocean crisis."

Mirella von Lindenfels, Director of the International Programme on the State of the Ocean (IPSO), said: "The ocean regulates our climate and buffers us from the full force of climate change by absorbing our excess heat and over a third of our CO2 emissions.

"Any irreversible and significant changes to the ocean could have profound economic and ecological consequences.

"We have named our new bottles 'Heat, Acidity, Deoxygenation and Pollution' to highlight how these climate-driven impacts on the ocean will affect life on Earth.

"As new research reveals, climate change cannot be treated independently of the marine plastic crisis, so must be tackled in tandem to synergistically reduce greenhouse gas emissions."

Dr Phil Hosegood, Associate Professor in Physical Oceanography at the University of Plymouth, said: “The bottles released during the G7 have already shown how plastics released offshore readily find their way back to our coastlines.

"Released off the coasts of Cornwall, they washed up on beaches not just nearby but also in the Channel Islands and France.

"It demonstrates a strong connectivity between currents in the open ocean and those flowing along our shores and beaches.

"However, it also shows this isn't an issue one nation can tackle alone, but that actions taken locally to prevent waste flowing from land to ocean could have a positive impact on our planet as a whole."

Over 359 million tonnes of plastic is produced annually and production has been predicted to double in the next 20 years.

With more than 40% of this amount allocated for single-use applications some groups, such as London’s #OneLess campaign, have decided to start tackling the plastic pollution problem close to home.

Over the past six years #OneLess has catalysed a change in the way Londoners drink water, from single-use plastic water bottles to refilling and reusing.

"Through our collaborative approach to this issue we’ve managed to bring together individuals, businesses, local authorities and the Mayor of London to identify the barriers to reducing plastic pollution and strategically choose actions that are turning the tide on single-use plastic water bottles in London," said Professor Koldewey.

"We’ve shown that that there are very tangible and immediate steps we can all take to reducing the amount of plastic that ends up in our waterways and eventually the ocean."

The launch of the latest group of devices also coincides with COP26’s Cities Day.

The group hopes that this latest data on the movement of ocean plastic will inspire other cities across the globe to take steps to curb single-use plastic pollution for the sake of our ocean.

The #OneLess campaign works with scientists, businesses, visitor attractions and governments to reduce the reliance on and numbers of single use plastic water bottles.

They have recently launched a practical guide aimed at organisations, campaigns and cities around the world that are interested in #OneLess as a systems change approach to environmental conservation.