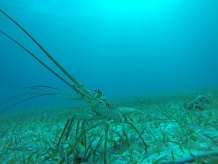 A programme to protect the Caribbean spiny lobster is being launched thanks to a $50,000 donation from the Disney Conservation Fund.

Spiny lobsters are among the world's most valuable seafood commodities and sustain some of the largest commercial fisheries worldwide. In the absence of adequate protection historically, overexploitation has resulted in the collapse of spiny lobster populations across many regions. Preventing this overexploitation, and resulting population collapse, is vital to protect the ecosystems and communities it supports.

This programme will be based in The Bahamas where the Caribbean spiny lobster is a vital fishery with the highest commercial value, accounting for $90 million annually and employing an estimated 9,000 fishers.

Through a combined collaborative research and community outreach programme, this project will develop guidelines for promoting species conservation whilst also fostering a prosperous and highly sustainable seafood supply economy in the region.

Dr Robert Ellis, Lecturer and NERC Industrial Innovation Fellow in Sustainable Aquaculture at the University of Exeter, will be leading on the project. He says: “This programme aims to develop and implement population management and stock-enhancement strategies that will ensure the long-term protection of this important species, while at the same time identifying commercial activities and infrastructure which can support sustainable harvest and create economic resilience.

“We aim to develop the first Caribbean spiny lobster nursery and education facility in the region, based upon the successful model for European lobster in the UK at the National Lobster Hatchery in Cornwall. This will involve collecting baby lobsters (pueruli) and allowing them to grow in safety before releasing into the wild. It is estimated that the survival rate for pueruli is less than 1% currently so this is an important first step for conservation.”

Research will be conducted into the best locations for the release of juvenile lobsters in order to ensure a higher survival rate, and the impact of the ‘stock enhancement’ will be monitored to assess effectiveness. Local fisherman will play a key role in the project, some of whom will be trained to collect the pueruli and assess settlement activities.

The programme is a partnership with the Cape Eleuthera Institute at The Island School, one of the most active research centres in The Bahamas and the wider Caribbean region, providing access to lab space, aquaria, boats and suitable field sites; and also The National Lobster Hatchery, a marine conservation, education and research charity based in Cornwall, which will provide invaluable insight into working with a commercial lobster species and formulating conservation objectives. Michael Bowleg Jr, a research assistant at the University of Exeter and visiting researcher at the Cape Eleuthera Institute at The Island School says: “As a Bahamian I see this course of work serving as crucial initial steps in not only creating alternative livelihood options in small island developing states such as the Bahamas but also contributing extensively to achieving various United Nations sustainable development goals”.

The project was supported via Disney’s Inspiring Action Conservation Grants Program. Since the fund’s creation in 1995, Disney has directed more than $120 million total in grants to diverse communities around the world to protect the magic of nature together by saving wildlife, inspiring action, and protecting the planet.