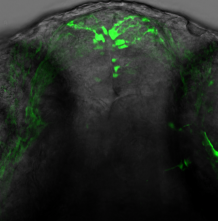 Fish study shows role of oestrogens in sense of smell

The study, which examined zebrafish embryos, discovered a type of astrocyte glial cell that is new to science, and have been named oestrogen responsive olfactory bulb (EROB) cells.

Oestrogens are known for their roles as signalling hormones in the development of sex, but the study shows that prior to sexual differentiation (when the sex of an individual becomes fixed), a small group of cells in the region of the brain where the sense of smell develops, the olfactory bulb, are responsive to oestrogen.

The research, led by Dr Aya Takesono of the University of Exeter, employed a genetically engineered (transgenic) zebrafish, developed in the laboratories of Professor Tyler and Dr Kudoh at Exeter,  that enables cells and tissues responding to oestrogen to be seen via microscopy imaging for this work.

Using this transgenic zebrafish, together with chemical and genetic methods to manipulate these oestrogen responding cells, has revealed a new function of oestrogens during embryonic brain development.

Dr Takesono said: "Previous studies in mice have shown that oestrogen is important for development of the somatosensory cortex of the brain and for establishing sexual dimorphic brain tissues that mediate reproductive functions and behaviour in later life.

"In this study, however, we show that the olfactory bulb is the one of earliest parts of the developing brain that is responsive to oestrogens in the zebrafish embryo.

"We further show that our newly discovered EROB cells mediate the oestrogen driven instruction for development of olfactory sensory system in the embryonic brain."

Tracing the development of these EROBs using various cellular and imaging methods showed they interact with olfactory sensory neurons and their loss – or disturbance of their interactions with the surrounding neurons – disrupts establishing inhibitory neural connections in the olfactory glomeruli.

Using another transgenic zebrafish, this time one that detects both neural activity (via the detection of calcium produced when nerve cells fire) and oestrogen responses, the study shows that oestrogen signalling alters neuronal activity in the olfactory bulb through these newly identified EROBs which in turn affects odorant-response behaviour.

This study provides evidence that oestrogens act on EROB glia to regulate olfactory circuits with important consequences for the sense of smell in later life.

Professor Tyler, senior author in the work, said: "This work identifying new embryonic brain cells involved in the development of the sense of smell in fish opens up a major new research area for us.

"Surface waters receive many man-made chemicals that mimic oestrogens and an intriguing question we wish to now address is whether these chemicals affect the function of the EROB glia in embryogenesis and thus alter the sense of smell, as this could have major fitness consequences for fish."

The study, published in the journal Development, is entitled: "Estrogens regulate early embryonic development of the olfactory sensory system via estrogen-responsive glia."

It is also featured in Research Highlight in the same issue of Development: Sniffing out the role of oestrogens in brain development.