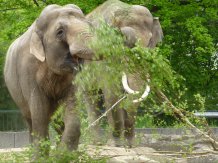 Nutritional enrichment can include providing food in a naturalistic manner, as seen here with Asian elephants. Credit Paul Rose.

Zoos and aquariums could improve the lives of a wider range of their animals, new research suggests.

The use of "environmental enrichment" (giving animals stimulating environments) has become increasingly common in zoos and aquariums in recent years.

The new study, by the University of Exeter and Sparsholt College Hampshire, investigated whether zoos base their enrichment on evidence of what each species needs.

It found this was the case for certain animals – especially carnivores and parrots – and certain types of enrichment.

However, the study identifies opportunities to "diversify the enrichment types being offered and species being researched".

"Our study shows that environmental enrichment is important, and zoos and aquariums are taking it seriously," said Dr Paul Rose, of the University of Exeter.

"Enrichment is no longer an afterthought, as it was 15 or 20 years ago.

"Based on our findings, we would urge zoos to keep doing enrichment, but with a greater focus on using the available evidence on what works for each species.

"Keepers should ask themselves what behaviours are being promoted, and what evidence exists to show that this behaviour is natural and beneficial in the long term."

The study examined a database of peer-reviewed studies, and two publications for zoo professionals.

Of the enrichment articles identified, almost 77% focussed on mammals, with 11% on birds, 6% on multiple species, 4% on reptiles and only a handful on amphibians, fish and invertebrates.

This focus on certain "high-profile" species can lead to more and better-quality enrichment for some species than others.

However, the use of biological evidence to inform this enrichment was patchy in the case of mammals.

The study identified a focus on certain types of enrichment, particularly nutritional enrichment – where food is provided in a way that mimics the animal's natural environment.

Meanwhile, there were far fewer articles on social enrichment, which focusses on the mix of individuals in a group, multiple mating options, etc.

James Brereton, of Sparsholt College Hampshire, said: "We encourage all zoos that practice enrichment to share their findings, as it may be that the range of enrichment being used isn’t always in the literature."

The paper, published in the journal Animal Welfare, is entitled: "An evaluation of the role of 'biological evidence' in zoo and aquarium enrichment practices."