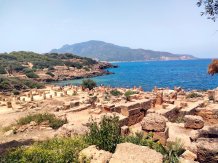 They found 56 sites (20 per cent) are at risk including the iconic ruins of Tipasa in Algeria.

Important heritage sites on the African coast classed as having “outstanding and universal value” are threatened by flooding and erosion because of the climate emergency, a new study warns.

A global team of climate risk and heritage experts have provided the first comprehensive assessment of how exposed the sites are to rising sea levels.

The team have mapped 284 African coastal heritage sites. They then modelled the exposure of each at future global warming scenarios. Dr Nadia Khalaf, from the University of Exeter, led the identification and mapping of the African heritage sites using satellite imagery and published literature, and created a spatial database of sites.

The research team created the first continent-wide, digitised, geospatial database of 284 coastal African Heritage Sites, consisting of World Heritage Sites that are either already recognised, or currently under consideration by the United Nations Educational, Scientific and Cultural Organization (UNESCO) World Heritage Centre and the Ramsar Convention on Wetlands of International Importance.

They found 56 sites (20 per cent) are at risk including the iconic ruins of Tipasa in Algeria and the North Sinai archaeological Sites Zone in Egypt. By 2050, the number of endangered sites is projected to more than triple.

At least 151 natural and 40 cultural sites will be exposed to rising sea levels from 2050. Countries which are projected to have all their coastal heritage sites exposed by the end of the century are Cameroon, Republic of the Congo, Djibouti, Western Sahara, Libya, Mozambique, Mauritania, and Namibia. Under the worst-case scenario, this is also true for Côte d'Ivoire, Cabo Verde, Sudan and Tanzania.

Dr Khalaf said: “Africa is at significant threat from the adverse effects of climate change, but how this will impact natural and cultural heritage is unknown. These sites have enormous economic, social, and ecological value for the people of Africa. Our research highlights the importance of multidisciplinary research across heritage and climate science and illustrates how the two can work in tandem to assess risks and mitigate loss and damage to African heritage.”

Professor Joanne Clarke, from the University of East Anglia and co-author on the paper said: “Small island heritage sites are especially at risk. For example, Aldabra Atoll, the world's second-largest coral atoll, and Kunta Kinteh Island (The Gambia) could both see significant amounts of their extent exposed by 2100 under high emissions raising questions of their survivability under climate change.”

The results highlight the importance of climate change adaptation and mitigation responses to protect and reduce the exposure of these iconic heritage sites. Professor Roshanka Ranasinghe from IHE Delft Institute for Water Education and co-author on the paper explained:, “if climate change mitigation successfully reduces greenhouse gas emissions from a high-emissions pathway to a moderate emissions pathway, by 2050 the number of exposed sites can be reduced by 25 per cent. This would be a significant saving in terms of Loss and Damage from climate change”.