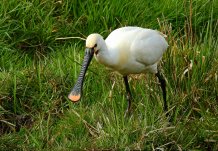 Participants were asked about animals whose range now includes the UK, including the Eurasian spoonbill

Wildlife watchers generally welcome species that have arrived in the UK due to climate change, new research suggests.

Many species worldwide are leaving areas that are becoming too warm, and moving into areas that were previously too cold.

University of Exeter researchers asked volunteers who contribute to wildlife recording schemes about their attitudes to various bird and insect species that have recently arrived in the UK under their own steam (not species introduced by people, which can be invasive).

Volunteers mostly welcomed new arrivals, although this welcome was cooler in the case of insects and species that participants weren’t familiar with.

"We found that wildlife recorders viewed range-shifters more as vulnerable 'ecological refugees' than as threatening 'climate opportunists'," said Dr Regan Early, of the Centre for Ecology and Conservation on Exeter's Penryn Campus in Cornwall.

"Respondents were strongly opposed to eradicating or controlling new range-shifters, but they also did not want to see conservationists trying to boost their numbers.

"Public opinion – especially among volunteers engaged in conservation – will play an important role in how we treat species arriving in the UK."

The survey results suggest that wildlife watchers were less positive to newly arrived species if they harmed native animals.

Lead author Dr Jamie Cranston added: "The complex questions of how and when to manage these arrivals are becoming increasingly urgent as more establish.

"Scientific evidence was a key factor in respondents' decision-making on management, but many also spoke of the 'wow' factor that some of these species had for them.

"I hope this could be an opportunity to engage more people with the excitement of biodiversity conservation."

Participants in the survey was given examples animals whose range now includes the UK – including birds such as the little bittern and Eurasian spoonbill, and insects such as the small red-eyed damselfly and the mottled shieldbug.

The paper, published in the journal People and Nature, is entitled: "UK wildlife recorders cautiously welcome range-shifting species but incline against intervention to promote or control their establishment."