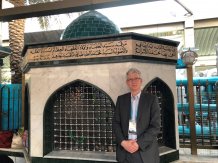 Fieldwork carried out over two decades in Iran and Iraq will help experts to produce the first comprehensive account of modern Shiʿism’s foundational intellectual moment.

The study, led by Professor Robert Gleave, from the University of Exeter, will detail events in the late 18th and early 19th century in the Islamic community when “Akhbārī” scholars lost their position of dominance to “Uṣūlī” scholars.

The research is funded by the British Academy and the Wolfson Foundation through one of five new British Academy/Wolfson Research Professorships awarded to the country’s most outstanding social sciences and humanities scholars.

The Uṣūlī victory meant that religious-legal authority belonged to the juristic/scholarly elite (fuqahāʾ), and this has been maintained until today - the opinions of the Shiʿite “Grand Ayatallahs” (the so-called “Sources of Emulation”) are generally considered binding for Shi'ite believers.

Akhbārīs beliefs had gained prominence in the scholarly centres across the Shīʿī world in the 16th and 17th centuries, with centres in Iraq, Iran and India. By the mid-19th century, Akhbārism had almost disappeared.

Professor Gleave, an expert on the history of Akhbārism, will detail the political, religious and legal contribution of the last recognised Akhbārī scholar, Mīrzā Muḥammad al-Akhbārī, who died in 1818. Al-Akhbārī was a late 18th/early 19th century Shi’ite cleric who gained a reputation as an irascible and confrontational scholar with forthright opinions. His disputes and public condemnation of many of the leading religious figures of the day make for entertaining reading and as part of the project strongly worded letters between al-Akhbārī and contemporary scholars will be published as part of collaboration with Mansur Sefatgol, from the University of Tehran.

Professor Gleave said: “Examining the intellectual biographies of individual scholars such as Al-Akhbārī can provide a deep but accessible insight into a period’s intellectual dynamics.

“Assembling numerous sources related to the period has been a major task, involving extensive fieldwork in Iran and Iraq over a 25 year period. This has involved collecting and deciphering manuscripts, analysing complex works of legal philosophy, and triangulating the manuscript and published sources with historical documentation from the period.”