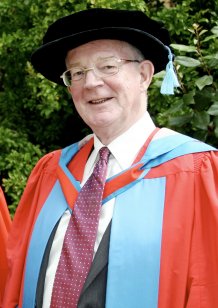 Heartfelt tributes are being paid to a pioneering University of Exeter engineer who co-created an implant that has revolutionised hip replacements for millions of people across the world.

Professor Clive Lee was one of the two masterminds behind the Exeter Hip, which research shows is among the world’s most successful hip implants globally. He died on Tuesday following a long illness, at the age of 82.

Professor Lee created the hip alongside Professor Robin Ling, of the Princess Elizabeth Orthopaedic Hospital, Exeter, who died in 2017. Their ground-breaking design overcame a problem of previous hip implants, which often required further surgery after they became loose.

Previous prosthetic hips had been designed with the idea that the implant should remain rigidly fixed to the acrylic bone cement in which it is implanted. Ling and Lee’s revolutionary design did not have a collar between the neck and the stem of the implant. This allowed the stem to subside slightly into the acrylic, self-tightening as it did so. The design made best use of the material properties of the polymer when bearing weight as the person moved on their new hip, helping many people remain free of pain, and significantly reducing the number of follow-up revision surgeries needed.

First fitted in 1970, the simple yet effective design has been fitted globally in over two million patients, with one million happening in the last 10 years alone.

In 2018, Universities UK listed the Exeter Hip among the 100 best breakthroughs from university innovation. Its success continues to grow, with research demonstrating its longevity. Earlier this year, 80-year-old Devon pensioner Maureen Brown was revealed to have the longest-lasting Exeter hip replacement, at an incredible 50 years.

A 2016 study, found the hip was still functioning well in 99 per cent of patients at 23 years follow-up. In another study in 2020, patients implanted with an Exeter stem 50 years or younger, demonstrated that the hip performed well over time in 96 per cent of people. Further research has found that the Exeter Hip Unit’s use of the Exeter hip stem for implants generates far superior results, when compared to the UK national average.

Speaking last year, as the Exeter Hip marked its 50th anniversary, Professor Lee spoke of his pride at his creation’s longevity and success. He said: “I started out not really knowing what a total hip replacement should look like – that was probably a huge advantage. We designed a very simple structure, and it turned out that going back to basic principles worked out very well indeed.

“We were aiming for a hip replacement that would last perhaps eight or nine years, and that would benefit patients locally. It’s a huge testament to the Exeter team and the university and NHS working together that it’s had such fantastic success. It’s a source of great pride.”

Professor Janice Kay, Provost of the University of Exeter, said: “We’re so sorry to hear of the passing of Clive Lee, a pioneering innovator and a wonderful man, and send sincere condolences to his family and all who knew him. We’re extremely proud of his legacy in improving pain-free mobility to millions of people across the world. The partnership between Clive, Robin Ling and many others really shows the incredible feats we can achieve when universities and the NHS work together.”

Professor John Timperley, Consultant Orthopaedic Surgeon at the Exeter Hip Unit, said he and colleagues were “profoundly saddened” by Clive’s death. He said: Clive was a close friend, teacher and brilliant scientist who worked with the Hip Unit for over half a century. Clive co-designed the Exeter Hip in collaboration with Robin Ling and this implant is so successful its use is still growing on all continents, with well over two million patients benefiting from their design. Clive’s laboratory work, explaining how the stem functions in the body, has become core orthopaedic teaching around the world. The orthopaedic and scientific community have lost an engineer who was a pioneer in the field of hip arthroplasty and an inspiration to surgeons in training. We send our heartfelt condolences to Pamela, and all of Clive’s family.”

Professor Lee remained proud of his Exeter connections. Continuing to live in Devon, he was an active member of the Exeter branch of the Exeter University Club, a social and educational club for alumni and retired staff. Branch secretary Peter Wingfield-Digby said: “Clive was a wonderfully modest, approachable, and active member of our Exeter University Club. At meetings, if I pointed him out to one of our new members, they would sometimes say to me: "Is that really THE Clive Lee of the Exeter Hip?"

Professor Lee is survived by his wife Pamela, son Philip and daughter Caroline.  His funeral will be held on 19th November at 2pm at St James Church, Mount Pleasant. In lieu of flowers, the family has asked anyone who could like to make a donation to do so for Hospiscare or Cancer Research UK by retiring collection or c/o M. Sillifant & Sons, 19-20 Holloway Street, Exeter, EX2 4JD or online at https://sillifantandsons.co.uk.