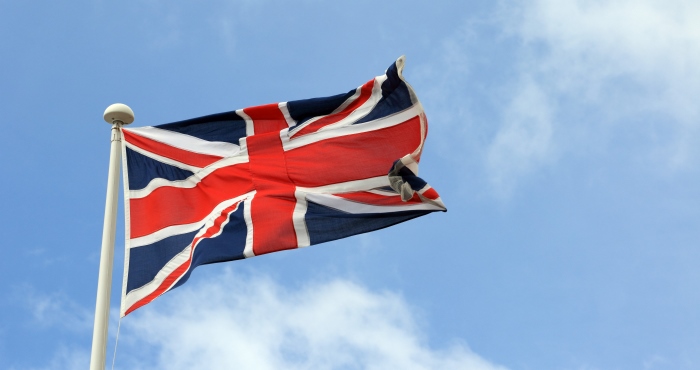 Exeter research was cited in a successful campaign to permanently fly the Union Flag over the Houses of Parliament. Image courtesy of Shutterstock.

As long-running debates on what it means to be British, English, Scottish or Cornish grow more urgent; researchers at the University of Exeter have engaged different public groups in new perspectives on identity and citizenship, encouraging them to reconsider their own identities in the context of regional and national cultural heritage.

Increased immigration, the rising influence of far-right groups, the success of UKIP in local elections, Cornish nationalism, and the recent Scottish Independence Referendum have thrust questions about Britishness to the forefront of public discourse. Research at the University's Exeter Centre for Literatures of Identity, Place, and Sustainability (ECLIPSE) engages different public groups in the cultural and historical contexts of these highly charged social and political debates.

The research by Professors Nick Groom and Marion Gibson has influenced media narratives, public policy debate, and a diverse range of discussions relating to regional or national identity.

Professor Nick Groom has been a prominent commentator on issues of national identity in diverse forms of regional, national, and international media. The reach of his research is indicated by the fact that his 5,000-word podcast, ‘Conflict and Cohesion in Britain, 2005-10’, broadcast on Scholarcast, a digital humanities project run by University College Dublin, was downloaded on average 100 times a day in June 2011 by visitors from around the world.

His research on the symbolism of flags has informed discussions about national identity in the British media and the work of political pressure groups. His published papers led to an invitation to speak at a Fabian Society seminar on citizenship at the 2008 Labour Party Conference and the TUC’s Equality Summit in the same year.

The success and impact of this work is evident in its citation in the successful campaign to allow the permanent flying of the Union Jack over the Houses of Parliament on the grounds that flag was a vital component of British cultural heritage and an instantly recognisable symbol of diversity and inclusivity. The decision, made in 2010, marked an end to a 150-year rule that the flag only flies when Parliament is sitting.

Professor Marion Gibson has published a series of books exploring how stories of supernatural events, specifically witchcraft, are shaped by local, regional and national contexts. This research developed into a specific interest in literary and oral narratives of Cornish identity as they have been influenced by ‘Celtic’ ideas of myth and mysticism, investigating how Cornwall’s mythologised past influences perceptions of Cornish identity as ‘Celtic’ and ‘un-English’.

The project, run with Dr Garry Tregidga of the Institute of Cornish Studies, resulted in a number of events which engaged the public at both regional and national level with issues of Cornish heritage and identity. This included the organisation of a public exhibition on myth and the supernatural in Cornish culture in 2010 in collaboration with regional artists, photographers, and cultural industries. It was accompanied by an oral history archive of 60 interviews with locals and tourists.