Engaging the public with Karl Gutzkow 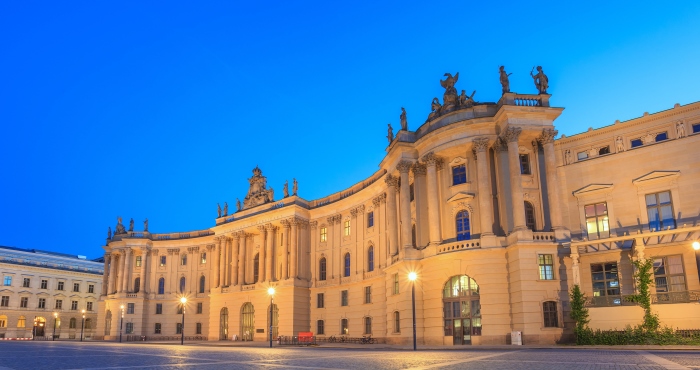 The Humboldt University of Berlin, where Karl Gutzkow studied. Image courtesy of Shutterstock.

Gutzkow was the figurehead of the Young German movement which introduced European liberalism and radicalism into German cultural life after the death of Goethe and Hegel.

His writings continually promoted these values when, after the failed revolution of 1848/49, the German intellectual elite broadly split into conservatism and socialism and, as an effect, side-lined his liberal agenda.

The Gutzkow project has transformed public access to the author’s work through open-access, online publication. Combining specialist scholarship with innovative editing, the project has considerably enhanced public appreciation of Gutzkow as a major contributor to 19th-century German culture.

As an internet-based edition in progress, it uniquely brings together editorial progressiveness, technological innovation by means of its Kronos electronic publishing platform, and critical investigation of a largely neglected literary and journalistic body of work.

In 2001, Professors Gert Vonhoff and Martina Lauster launched the online edition and edited the pilot volume, which introduced the Gutzkow project to the public. The efforts to raise the author’s profile were rewarded by an excellent field of participants joining a conference held in Exeter in 2010 in anticipation of the bi-centenary of Gutzkow’s birth; the proceedings were then published on the bi-centenary in March 2011 with the support of Forum Vormärz Forschung, one of the leading literary societies for the 19th century.

The project has impacted on public engagement with the 19th-century German novel and its heritage. As the only contemporary editing project on this author, it has redefined Gutzkow’s place in the literary canon, transformed public access and raised Gutzkow’s public profile.

User testimonies, the international press, public acknowledgement and involvement in events in the region reveal a significant renewal of public interest in Karl Gutzkow. The project’s edited materials have been coopted into an interdisciplinary linguistic digitisation project in Berlin and will be fully integrated in its open-access linguistic database.

On the basis of calculations derived from earlier figures, it is estimated that between January 2008 and June 2011, the Gutzkow site received more than 3,000 hits. In July 2011 a new counter was installed, which indicates 4,750 hits from that date to 30 July 2013, suggesting an increasing interest as the volume of texts and commentaries available has expanded.

Evidence of this transformed public profile can also be found in the press. Germany’s leading daily broadsheet Frankfurter Allgemeine Zeitung, which has a circulation of approximately 362,000 and the highest distribution abroad of any German newspaper, highlighted Gutzkow’s relevance for today’s readers on Gutzkow’s bicentenary, stressing his ‘concept for a modern novel’.

The project has thus revolutionised the perception of Gutzkow, placing journalistic texts and critical commentaries alongside his more widely-known literary works for the first time.