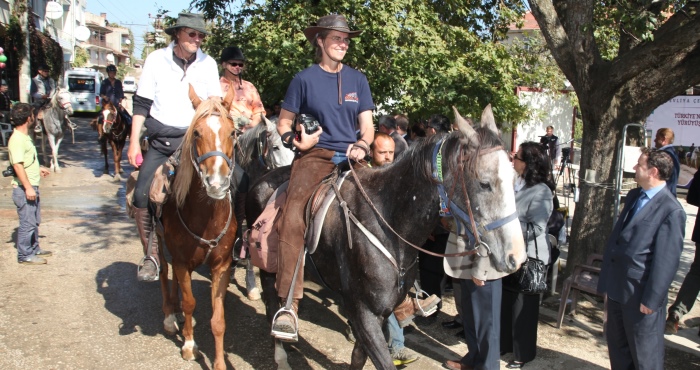 Research at the University of Exeter has raised public awareness of early modern Ottoman history and promoted sustainable equestrian tourism by establishing a UNESCO Cultural Route, the Evliya Çelebi Way.

In 2009 Professor Gerald Maclean re-enacted the 1671 horseback journey undertaken by the celebrated Ottoman travel-writer Evliya Çelebi, attracting media coverage and building links with local communities. He has since collaborated in developing the Way to promote cultural heritage and stimulate tourism in Turkey.

The main impacts of this research have been to preserve, conserve, and present cultural heritage; contribute to processes of commemoration and memorialisation; encourage tourism, and contribute to the quality of the tourist experience.

This research has established how commercial, scientific and diplomatic travel writers in early modern Britain replaced medieval hostility to the Ottoman Empire with fascination. It has broken new ground to reveal how British and European culture before 1800 was shaped by encounters with Islamic cultures in ways that complicate contemporary debates over the ‘clash of civilizations’ between east and west.

A 2004 monograph traced the encounters of English travellers with the Islamic Ottoman world and was followed by Looking East (2007), in which Professor Gerald Maclean developed original models for understanding English fascination with Ottoman culture and statecraft. The influence of Looking East is indicated by its translation into Turkish in 2009. In the same year he edited an interdisciplinary selection of papers from a major conference that he organised in 2009, supported by the British Academy, at the Institute for Arab and Islamic Studies at the University of Exeter, which attracted over sixty speakers from nine countries and numerous disciplines.

Since 2007, Professor Gerald MacLean has presented his research on early Anglo-Ottoman relations to public audiences, including four annual lectures at the Victoria and Albert museum, radio interviews in the UK, Turkey, India, and an invitational lecture at the Turkish embassy in London, as well as public lectures on the Evliya Çelebi Way project itself.

Public interest generated by the 2009 Ride played a leading role in the creation and recognition of the Evliya Çelebi Way by the Turkish Ministry of Culture as Turkey’s first equestrian Cultural Route, following approval by the TURSAB Eco-tourism group for promoting sustainable tourism in rural areas to benefit local economies.

The number of tourists visiting Evliya’s ancestral province of Kütahya doubled from 81,855 in 2008 to 170,597 in 2010, and extensive attention to the Ride in the Turkish national press and TV was crucial to the case made by Turkey’s UNESCO committee for declaring Evliya ‘Man of the Year’ for 2011.

This in turn led to a sponsored exhibition, ‘Evliya Çelebi: The Book of Travels’. The exhibition opened in Bethnal Green in May 2010 for three days, attracting over 500 visitors a day, including classes from local schools. It has since opened in Turkey, in Athens at the world-famous Benaki Museum, and Thessaloniki . The online exhibition has been visited by 17,867 people in 105 countries including the UK, the US, Canada, Greece, Bulgaria, Australia, Malaysia, Sweden, Germany, France, Turkey, and Oman.