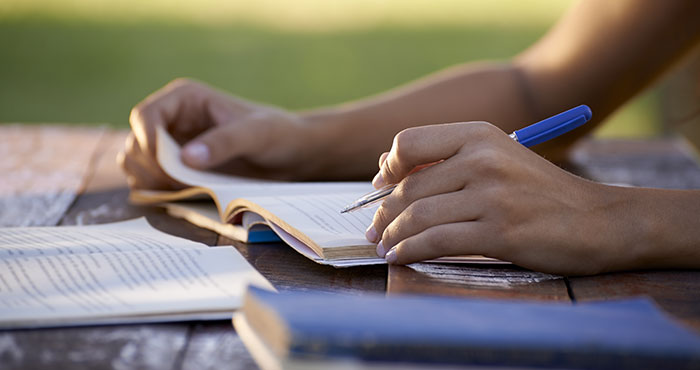 The success and reputation of Exeter Creative Writing created an environment which helped to bring internationally recognised literary figures to Exeter to give public lectures. Image courtesy of Shutterstock.

The collective research-as-practice OF the University of Exeter’s Creative Writing team has enriched public appreciation of contemporary literature in the UK and globally.

Their publication of a number of critically acclaimed and popular works has given the team standing to hold a series of events and workshops as part of a strategic outreach programme that has increased public participation in creative writing and inspired and supported new literary publications and careers.

Funded projects to develop new writing have strengthened relationships between academic and creative sectors and inspired new and successful writing careers. The main impacts of this research-as-practice have been to: create new forms of literary expression and enrich public appreciation of contemporary writing; engage different publics in creative practice through participation and events; and inspire and support new forms of literary expression.

The research-as-practice of the University of Exeter’s Creative Writing staff is characterised by their critical engagement with the forms and genres of modern fiction and poetry, and the creative translation of this research into original works that advance contemporary writing and generate new ways of thinking about literary expression.

One of the most notable achievements of the research environment developed by the team has been to inspire and support new and commercially successful writing. Riptide, launched in 2007, started as a bi-annual short story journal and is now a commercial venture.

The publishing success and reputation of Exeter Creative Writing created a research environment at the University of Exeter and in the South West of England, which helped to bring literary figures of international standing to Exeter to give public lectures, including Philip Pullman, Hilary Mantel, and Paul Muldoon, and to increase public participation in creative writing events. Hilary Mantel has subsequently become Honorary Visiting Professor in the University of Exeter’s College of Humanities. Twenty public events were also held between 2008 and 2013, attracting audiences of over 3,000 people.

Public writing workshops held in partnership with regional and national cultural agencies have been central to the Exeter Creative Writing’s strategy to engage different public groups in creative practice. Their collaboration in 2010-11 with Claire George in a series of public workshops in Devon and Cornwall around the theme of ‘Imagine There’s A Future’, in which participants were invited ‘to create fictions set in a sustainable future’ and were brought together in reactive encounters with experts in climate change and environmental campaigners. As part of this scheme, twelve selected writers from the South West were mentored by Exeter Creative Writing. Two of these writers subsequently contracted their novels to major publishers (Serpent’s Tail, and Simon & Schuster).

Some of the student successes of this project include: