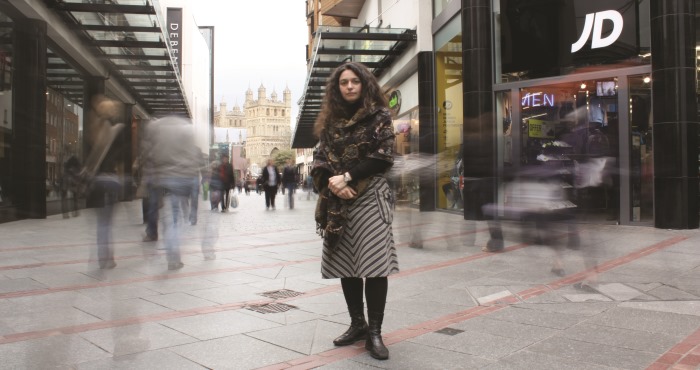 There is a widespread misconception that high mobility is a relatively recent phenomenon and that ancient society was largely sedentary, though in fact it too involved extensive movements of people. If we recognise this fact we can draw powerful analogies with the ancient world and use these to question current notions of belonging, ‘the migrant’ and the significance of place.

Professor Elena Isayev has led three projects, drawing on the implications of historical scholarship, in collaboration with art practitioners, to engage young people, minority and disaffected groups in shared reflection and creative activity.

These projects, centred in the paradoxical idea of Future Memory, have been used to create alternative spaces in which to re-think attitudes to human mobility, otherness and identity. While promoting new forms of cultural and artistic activity, the projects have also produced social benefit in enabling large numbers of people, especially young people in deprived communities, to think about their own identity, memories and sense of belonging.

Focusing on ancient Italy, the research challenges the prevailing view that in the ancient world there was a natural tie to a specific homeland and a demographically settled world. Professor Isayev argues that the combined evidence of archaeology and literature suggests that human mobility in the last millennium BC was ongoing and cyclical.

As a result, xenophobia is difficult to identify in ancient Italy, and outside the military context ‘the foreigner in our midst’ was not seen as a problem. Boundaries of status rather than geopolitics were the ones that were difficult to cross. In view of the high level of population movement in pre-Imperial Italy, Professor Isayev disputes the general assumption that ties to physical territorial sites were essential components of individual and collective identities.

She also stresses the absence from ancient culture of many features, such as a rigidly bounded territorial citizenship that are typical of a nation state. These observations allow us to raise broader implications for contemporary culture and practice.

The three projects that formed this research have strengthened links between artists, community groups and organisations, producing substantial social benefit by enabling an expanding network to promote shared reflection on identity and place among increasingly large numbers of members of the public.

In particular, the third project, which stemmed from a presentation in Glasgow of a project with Swansea University, explored ideas of memory and place in conjunction with the Red Road Flats community and Glasgow-based artists and academics. Pupils collected objects dispersed when the high-rise flats were recently blown down, and, having worked before with ancient archaeological objects, acted like archaeologists themselves by creating histories with the objects.

These histories were then translated into colour, by associating specific colours with specific emotions. Finally these colours were sung by a choir, leading to a public performance that projected these voices and sounds, along with stories by ex-residents of all ages and backgrounds from one of the remaining towers. This constituted a unique and remarkable cultural event with profound significance for those involved. The documentary film of these events will take this to a wider audience and further an alternative multiple narrative.

The project was supported by the Arts and Humanities Research Council Beyond Text programme.