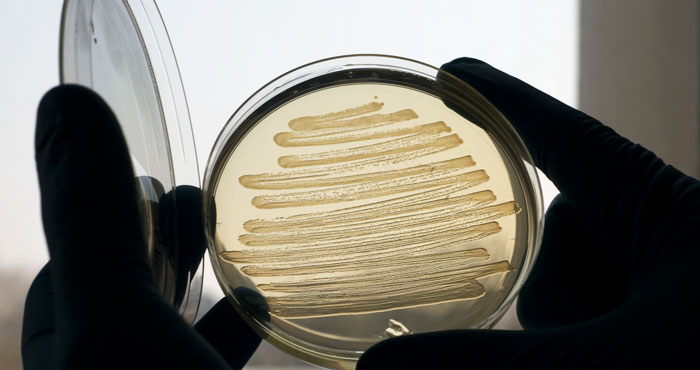 The bacteria used to produce biofuels.

Bacteria modified to produce fuel on demand have been produced by University of Exeter researchers in collaboration with energy and petrochemicals group Shell.

Academics led by Professor John Love have found a way to get the organisms to produce fuel nearly identical to diesel. This will help meet future fuel demands without the need to change existing infrastructure and help extend the lifespan of existing petroleum supplies. In addition the production space required for these fuels would not compete for land used for food production, as many biofuel production spaces do.

Professor Rob Lee who leads the biotechnology innovation programme at Shell Research Centre in Houston is enthusiastic: “The research on bio-hydrocarbons has been so successful that Shell has adopted this Synthetic Biology approach across multiple platforms for the development of new, sustainable routes to our products. To that end, Shell and the EMBG are working closely to develop a universal microbial host for the industrial production of a range of bio-hydrocarbons that will support Shell’s business into the future.”

Dr Love explained: “Our groups work very closely together, and have allocated tasks based on our different areas of expertise; at Exeter, we design the molecular control systems and synthetic pathways and Shell develop the optimum conversion routes from raw biomass to product. We also have collaborations with Manchester Institute of Biotechnology, who are looking at improving the enzymes used in production of bio-hydrocarbons.”

This work has also supported knowledge exchange between Shell and the University. Dr Love spent 18 months working at Shell Research Centre. Nine of Shell’s scientists and project managers have worked at Exeter’s facilities. Shell has also funded five Masters and six PhD students. Additionally, postdoctoral research assistants working on Shell-funded projects have the opportunity to work at the group’s labs.

The impact of this research extends beyond Shell. The EMBG supported the development of bioreactors at algae culturing systems firm Enlightened Designs Ltd. This enabled the company to develop, promote and legally protect a new product range.

EDL’s Chief Executive said: “The support from Drs Clive Butler and John Love at the University was instrumental in kick-starting the project.”

The group have also set up a partnership with Axe Vale Community College in Axminster. They worked with the college to establish a biodiesel production facility using waste vegetable oil. The project was one of only four selected by the Royal Society to exhibit at their 350th anniversary celebration in 2010. It also featured on popular television series River Cottage.

Research into biofuels at Exeter has attracted more than £12million in funding. The Biotechnology and Biological Sciences Research Council has supported essential aspects of the work.