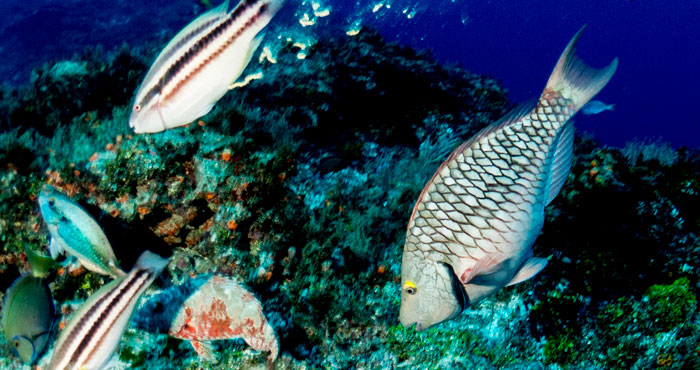 Exeter research has led to new legislation on fish catch and size limits.

Research on coral reef ecosystems has helped generate new legislation in Belize and Bonaire that bans the fishing of parrotfish as well as annual catch and size limits for parrotfish caught in US Caribbean fisheries.

Peter Mumby, a Professor of Marine Ecology, has demonstrated a link between herbivorous parrotfish and coral recovery. His research has provided critical evidence showing that reserves that protect parrotfish are better able to recover after a disturbance, such as a hurricane or bleaching event, than reefs outside the reserve.

Professor Mumby has used models to show how protection of parrotfish can improve reef resilience and have long-lasting benefits to Caribbean reefs in the face of climate change. Under some scenarios, local conservation of parrotfish could extend the life of a coral reef by 40 years, which would give reef species more time to adapt to a changing environment.

Over the last few years Professor Mumby’s research has provided the rigorous scientific evidence needed to influence policy makers and trigger legislative changes. In 2009, the Government of Belize enacted legislation to ban fishing of parrotfish. Professor Mumby informed the process by talking to fishermen in collaboration with the Wildlife Conservation Society. Based, in part, on the evidence presented, fishermen requested that the government took action to ban herbivore exploitation.

In 2010, the Executive Council of Bonaire, Netherlands Antilles, also enacted legislation to ban fishing of parrotfish. Professor Mumby worked with his colleague Professor Robert Steneck from the University of Maine, USA and with Stichting Nationale Parken Bonaire (STINAPA Bonaire), a non-government foundation commissioned to manage the marine park, to provide the body evidence to support the proposal for the new legislation.

The US National Marine Fisheries Service (NMFS) also used Mumby’s work to support a new regulation that came into effect in January 2012 that prohibited fishing and possession of the three largest parrotfish species in US Caribbean waters and established annual catch limits for parrotfish.

However, Earthjustice, a non-profit environmental law organisation based in the US, felt these new regulations did not go far enough to protect parrotfish. The organisation filed a lawsuit in January 2012 against NMFS, alleging that federal regulators violated the Endangered Species Act by allowing the harvesting of parrotfish at high rates. Once again Professor Mumby’s research was used as evidence to support Earthjustice’s case against NMFS. Several aspects of the lawsuit were successful and NMFS is currently reviewing its processes for monitoring the impact of parrotfish fisheries on coral reefs.