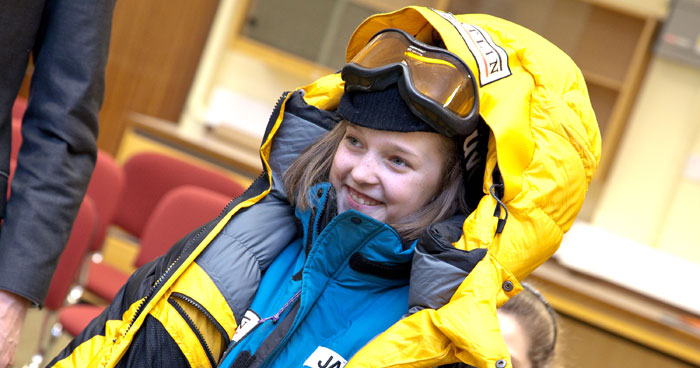 Research on ocean acidification in the Canadian High Arctic has formed the basis for a successful educational programme that has reached over 500 UK secondary schools. The programme provides free curriculum-linked resources, connects scientists with classrooms and gives hands-on training for teachers.

Dr Ceri Lewis, Lecturer in Marine Biology at the University of Exeter, is one of several scientists supported by the Natural Environment Research Council (NERC) who spent two months living in tents pitched on the sea ice and working in temperatures as low as -40°C as part of the Catlin Arctic Expeditions in 2010 and 2011. The researchers drilled through the sea ice to access the Arctic Ocean below and collect water and plankton samples in order to build a picture of this ecosystem.

Dr Lewis said: “The Arctic Ocean is acidifying faster than anywhere else on the planet yet we have no data for half the year because it is covered in two metres of sea ice. This expedition gave us an opportunity to get those missing data and develop an understanding of current carbonate chemistry so that we can better interpret what might happen in the future.”

Now Dr Lewis is telling her story of conducting research in this extreme environment as part of the Frozen Oceans education programme.

She explained: “We were made aware of how important the imagery was of us sitting there with frozen faces as we tried to collect data. It put the element of human suffering into the science story. As scientists, we saw the value of this in helping to attract people to learn about ocean acidification that might not otherwise have known about it, or been interested.”

The Frozen Oceans programme is the creation of Jamie Buchanan-Dunlop, a communications and education specialist, as well as a fellow expedition member. Mr Buchanan-Dunlop is the Director of the non-profit organisation Digital Explorer, which aims to bring real science and exploration into the classroom.

He said: “Digital Explorer’s philosophy to education just wouldn’t work without people like Ceri and the other scientists that we work with. We believe that young people should have a real education and that means real science and real scientists. It means learning from people with first names.”

Frozen Oceans includes more than 50 lesson plans, fact sheets, experiments and a media kit with over 200 photos and 35 videos from the expedition. The freely available resources were launched online in September 2011 and within nine months had reached in excess of 387,000 students. Since then, the programme has been adopted in over 514 schools in the UK and is being used internationally in Australia, the United States, Portugal, Sweden and Italy.

Mr Buchanan-Dunlop added: “What working with a researcher like Ceri does is provide us with three things. First, you have an adventurous, personable context, which draws in the students. Second, you have highly rigorous and robust expert science.

Third, you put it all together in a curriculum that is a story about our changing world. What more could we wish for our children than that.”