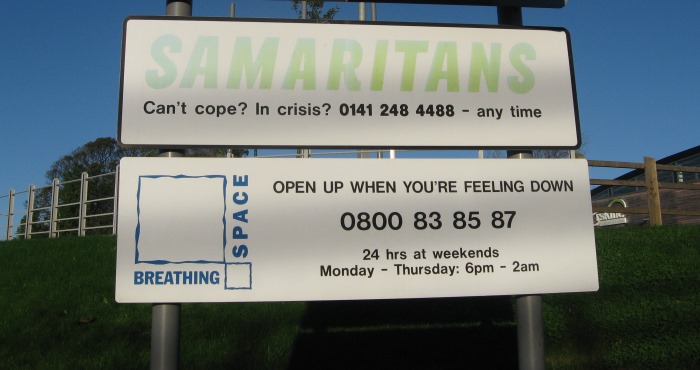 Dr Christabel Owens is working with suicide prevention charities and public agencies to improve community safety, and public awareness and understanding of suicide.

The University of Exeter Medical School team’s work looks at non-clinical interventions. They have collaborated with organisations including charity Samaritans and police forces to develop, implement and evaluate such interventions. Approximately 5,000 people in the UK take their own life each year, many of whom have not consulted their doctor. Thus it is essential non-clinical methods are effective.

In 2006, the research team were commissioned to develop national guidance on action to take at suicide hotspots. They produced a prevention handbook to support the work of local suicide prevention partnerships, which was implemented across the UK. It also influenced policy and practice worldwide.

It led to the installation of prevention barriers and Samaritans signs at many hotspots. For example, a £1million Transport Scotland investment in prevention barriers on Glasgow’s Erskine Bridge saw suicides fall from 16 to three in two years. At Newcastle’s Tyne Bridge, call-outs by police negotiators to deal with individuals threatening suicide fell by more than 100 in the two years after signs were installed.

Kate Redway of Samaritans said: “We are really pleased there has been a decrease in police call-outs to incidents on the Tyne Bridge. We hope the signs continue to raise awareness of Samaritans and encourage people to contact support services like ourselves at an early stage.”

In 2014 Public Health England commissioned Dr Owens to update the guidance. The new edition is due for release early in 2015. Public health teams throughout England will be instructed to act upon it.

The University of Exeter Medical School team have been researching lay (non-clinical) perspectives on suicide since 2000. In 2006, a £280,000 Medical Research Council grant enabled them examine the role family and friends can play in preventing suicide.

They found those close to the suicidal individual had to make complex judgements about what was happening and how to handle it. They were often unable to do so through fear. The research team concluded public education should focus on helping people recognise and overcome their fear, as well as telling them what they should do.

A strategic partnership was formed with The Alliance of Suicide Prevention Charities (TASC), which appointed Dr Owens as scientific advisor in 2012, with a view to collaborating on a public engagement programme. This led to articles in popular magazines, including fashion and beauty publication Marie Claire, designed to raise awareness of and break taboos about suicide.

Since then, a leaflet, It’s safe to talk about suicide, has been launched. Supported by Devon County Council’s public health directorate, the leaflet is aimed at anyone who is concerned someone has reached rock bottom.

It was made available at community locations across Devon, including GP surgeries, Citizens Advice Bureaux, job centres and housing departments.

Dr Owens said: “Since launching it in September 2014, we’ve been inundated with requests for copies of the leaflet from agencies we weren’t even aware of. We’ve also had a lot of requests from outside Devon, and we’re now working with leading suicide prevention charity CALM (Campaign Against Living Miserably) to create an interactive web-based version, in order to make it more widely available.”