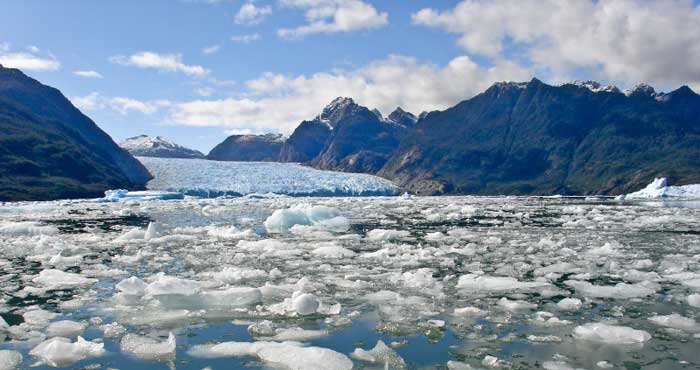 Exeter research into tipping points has impacted on government and industry.

Research conducted at the University of Exeter has altered the framework for climate change discussion, informed government debate and influenced policy. The concept of climate tipping points also prompted the insurance and reinsurance industries to reconsider their risk portfolios and take into account high-risk tipping point events.

Professor Tim Lenton, Chair in Climate Change/Earth Systems Science at Exeter, was one of a group of academics that in 2008 first defined climate tipping points - the critical levels at which any small disturbance can push the Earth’s systems into different ways of operation with long term consequences.

The scientists also introduced the concept of tipping elements – the large scale components of the Earth’s system that might pass a tipping point – and described how early warning systems could be established to determine our proximity to these tipping points. This pivotal work became the foundation for a body of research on climate tipping points that has directly led to numerous impacts in policy and practice.

The pivotal paper published in 2008 by Professor Lenton and his colleagues contributed significantly to the widespread recognition that the climate may change more abruptly than portrayed in the Intergovernmental Panel on Climate Change (IPCC)’s Fourth Assessment Report of 2007. The concept of tipping elements which it introduced was adopted in publications by international organisations such as the United Nations Environment Program (UNEP) and the International Alliance of Research Universities.

In 2012, Professor Lenton was called as an expert witness to the House of Commons Environmental Audit Committee as they reviewed the UK Government’s performance in protecting the Arctic. Professor Lenton has worked extensively on the Arctic system, helping to define Arctic tipping points and describe a range of potential tipping point phenomena. In its final report, the Committee acknowledged that ‘there may be a number of tipping points in climate-driven systems in the Arctic, which threaten to rapidly escalate the danger for the whole planet’ and recommended that the UK Government ‘continue supporting Arctic science as a key component of its work on climate change’.

Professor Lenton’s work has also informed government debate. In 2012, his research was cited in the World Bank Report, 4o Turn Down the Heat. This report was used by Western Australia’s Legislative Council during debate on the Climate Change Readiness (Coastal Planning and Protection) Bill 2012 and also by the Australian Capital Territory (ACT) Legislative Assembly. His work has been referred to in Canadian Parliament and in studies ordered by the US Congress.

In 2009, Lenton co-authored a report for the World Wide Fund for Nature (WWF) and the international financial services provider, Allianz, which looked at the potential impacts of several tipping point scenarios on the insurance sector. The report highlighted the fact that these high impact scenarios have been largely ignored and that the economic consequences of passing some of these climate tipping points could be devastating. In a press release Clemens von Weichs, head of the Munich-based Allianz’s reinsurance unit said: “As an insurer and investor, we must prepare our clients for these scenarios as long as we still have leeway for action.” As a result, Allianz is setting risk-appropriate and sustainable premiums.

Professor Lenton admits that the tipping point scenarios he looks at in his research may be low probability, but they are also high risk. He said: “It is considered a bit radical to talk about the low probability events, but as economists and policy-makers would tell you, we need to devote a significant amount of time to trying to understand high impact events, even if they are a low probability.

Professor Lenton’s advice continues to be sought internationally as governments and international organisations formulate policies and plan for climate change. He was recently invited to speak at the United Nations’ New York office to discuss tipping points as part of the UN’s first solicitation of scientific input as they begin to formulate sustainable development goals to be launched in 2015.

Professor Lenton was also recently invited to the White House by the President’s Office for Science and Technology to help develop a conceptual model of the Arctic ecosystem that includes potential Arctic climate tipping points.