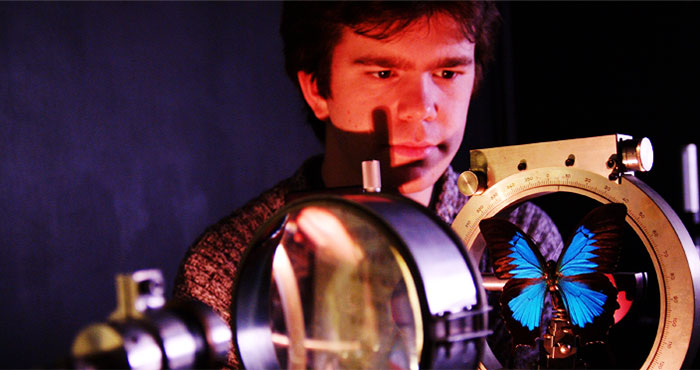 University of Exeter research has helped QinetiQ to innovate.

The manipulation of electromagnetic radiation using novel structured materials by physicists at the University of Exeter has helped the global competitiveness of defence and security company QinetiQ and led to new technologies.

Research from the University’s Electromagnetic and Acoustic Materials research group working with QinetiQ has resulted in technology that can be used for radio frequency Identification (RFID), a key technology for remote object tracking, anti-counterfeiting measures to help limit the multi-billion dollar counterfeit market in goods and banknotes and reducing radar signatures from buildings at airports and wind turbines.

Since the 90s Exeter’s Electromagnetics and Acoustic Materials research group has developed a strong relationship with the Smart Materials and Technologies (SMT) team at QinetiQ. A spokesman for QinetiQ said Exeter’s input has helped them to ‘maintain an innovative culture’ within their SMT team – which has one of the highest patent generation rates in the company.

Exeter’s Professor Roy Sambles added: “QinetiQ are not asking us to simply solve problems they are asking us to do imaginative and creative research. So we have come up with a number of new ideas and they have patented, in my case, about 20 of them.”

The main focus of the collaborative research has been the investigation of structures that can tailor electromagnetic radiation to specific requirements. This research, led by Professor Sambles flourished with a MoD Research Fellowship in 1998 that funded a collaborative study of the structural colouration of butterflies. By understanding how butterfly wings create a myriad of visual effects (eg, vivid colours) through subtle changes in the size, shape or structure of fine scales on their surface, the team could apply these principles to control infrared, microwave or radio wave radiation.

Further research provided an understanding of the underlying optical effects caused by multi-layered structures within butterfly wings, which inspired patented technology that could be used to create clearer optical signatures within credit cards and banknotes to help counter forgery.

A major breakthrough, which led to a highly successful spin-out company Omni-ID, came with the discovery of Very Thin Radar Absorbing Material (VTRAM), believed to be the world’s thinnest practical RF absorber.

This discovery solved the problem of being able to use RFID to scan lots of conducting objects very quickly. Professor Sambles explained: “If you have a baked bean tin and fire microwaves at it they reflect because the electric field associated with the microwaves at the surface is tiny, so putting a sensor on the surface is useless because there is no signal there. We made a metal surface where the electric field of the microwaves on the surface, instead of being zero, was actually very large.”

This work was significant in the development of RFID technology because it meant there was now a thin material that could be placed between the RFID tag and any conducting surface, allowing the tag to be addressed by a remote microwave source.

RFID tags are used for automatic identification and tracking, such as identifying blood plasma samples as thousands pass through automated screening for medical assessment. Normally the signal from standard RFID tags cannot be read if the tags are close to metals and liquids. This work changed that and offered a solution to companies like WalMart who wished to RFID tag all their goods.

Omni-ID grew rapidly, from an initial offering of three products to a portfolio in excess of 20 products. In 2012 the company won ‘Best in Show’ at the RFID Journal Awards for its Visual Tag System, which provides workers with real-time information and instructions regarding moving assets.

Its high-frequency RFID tag technology is being used by the US Government, IBM and Bank of America for cheaper and more efficient IT asset management; by BP, Shell Oil and Petrobas to increase the traceability of assets through the oil production process; by BHP Billiton and Holt Cat for tool inventory; and by GE Healthcare and Johnson & Johnson for safe monitoring of pharmaceuticals.

In addition, the development of several joint patents between Exeter and QinetiQ contributed to an Engineering and Physical Sciences Research Council £3.2million Knowledge Transfer Account in 2009, (one of 12 in the UK), to focus on developing anti-counterfeiting technologies.

Around five per cent of world trade is now in counterfeit goods, with the industry now moving from innocuous items like shoes and handbags to fake medicine and pesticides. By controlling electromagnetic radiation, it is possible to make performance improvements to RFID tags that make items easier to track and locate, and to help prevent theft and forgery.

By 2012 the project generated four patent applications and inspired the creation of Arkiris Ltd, a company jointly run by Exeter and QinetiQ to work in the security and tagging markets.

The Arkiris project has taken IP not being used by QinetiQ and developed it into technology that is being licensed in the fields of security and anti-counterfeiting. A QinetiQ funded project at Exeter is currently with a security customer to integrate a technology described in two patents into their product.

A further collaboration between Exeter, QinetiQ and Sweden’s Institute for Surface Chemistry identified new technologies that can be used to prevent the counterfeiting of documents. A three-year £180,000 project began in September 2012, using Exeter’s expertise in electromagnetic metamaterials to explore new stealth technologies based on vibroacoustics.

In the same month QinetiQ also placed an Industrial CASE award within the department of Physics and Astronomy to develop a deeper understanding of the terahertz regime and explore new markets in what is still relatively virgin territory for commercial and governmental applications.