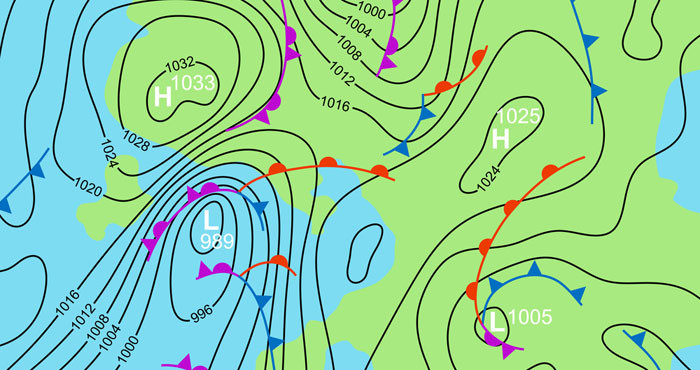 Operational weather and climate prediction are carried out using enormously complex systems, at the heart of which is a numerical model. The model component that solves the equations of atmospheric dynamics and thermodynamics, on the scales resolved by the model grid, is called the 'dynamical core’.

Researchers at the University of Exeter have made several key contributions to the formulation and development of ENDGame, the new operational dynamical core of the Met Office weather and climate prediction model. ENDGame has been shown to deliver improved accuracy, robustness and efficiency.

The public and a wide range of UK services and industries benefit from weather forecasts provided by the Met Office, including agriculture, aviation, construction, energy, retail, and transport. The economic value of the forecasts has been estimated to be in excess of £600million a year and perhaps much more. Forecasts of severe weather have a huge value in terms of public safety and the accuracy and value of the forecasts clearly depend crucially on the accuracy, as well as efficiency, of the forecast model dynamical core.

Climate change, forced by anthropogenic greenhouse gas emissions, will have major impacts on society in the UK and worldwide. Both mitigation and adaptation measures will have huge costs, from the level of individual businesses and organisations up to national government level. Policies on mitigation and adaptation require the best possible predictions of the future evolution of the climate, and our best available tools for making those predictions are sophisticated numerical models such as the Met Office / Hadley Centre climate model (a variant of the Met Office weather prediction model). Again, the accuracy and value of the predictions depend crucially on the accuracy of the model and its dynamical core.

Over the last decade the Met Office, working closely with Professor John Thuburn, have developed ENDGame to improve upon their previous dynamical core, New Dynamics. One area of improvement, to which Professor Thuburn has contributed, is in model stability: for operational use, the dynamical core must be robust and free from numerical instability within its planned operating regime as model failure causes major disruption. Tests have shown ENDGame to be more stable and robust than the previous operational dynamical core.

Another area of improvement is in model accuracy. Professor Thuburn's work helped to understand how to represent wave propagation as accurately as possible in the model. Accurate wave propagation is essential for an accurate representation of large-scale dynamical balance in the atmosphere. In addition, improved stability has allowed a reduction in artificial and undesirable damping mechanisms in the model. As a result, ENDGame produces more detailed and realistic individual synoptic features such as cyclones, fronts, troughs and jet stream winds.

Finally, the global version of ENDGame is also more efficient than its predecessor. The Met Office has been able to increase the resolution of their global weather forecasts due to improved scalability (the increased speed achieved by using more computer processors).

ENDGame is now being used for global weather and climate prediction work and the regional and seasonal prediction systems will be moved to use ENDGame over the next year. Professor Thuburn engaged with the ENDGame project at an early stage (2005) by providing an independent review of a draft ENDGame formulation. The pull through of the research into operational development has been facilitated by frequent close contact between Professor Thuburn and the Dynamics Research group at the Met Office; since 2005 he has typically spent one day per week visiting the Met Office.