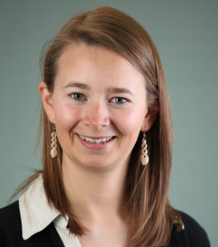 I studied at Exeter in the Biosciences department from 2005, and have been employed at the University since graduating in the summer of 2008. My first role was as a Graduate Management Trainee, and over two years I was involved in different projects and roles in a variety of departments, including Finance Services, the Politics department, and Strategic Planning and Change (formerly Planning Services).

After the two years of the Graduate Management Scheme, I took the role of Planning and Business Intelligence Analyst in Strategic Planning, and subsequently became the Senior Postgraduate Research Administrator for the Business School in 2011. After four years in this role I was appointed as Research Manager, supporting the research grant lifecycle from pre-award to the end of grants.

As part of the University Transformation project, I moved to the Physical Sciences and Technology cluster in September 2018, as Research Development Manager.