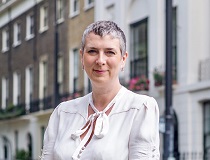 Caroline Wyatt has been reporting on war and global affairs for over 25 years, working as a foreign correspondent for BBC News.

Since being diagnosed with MS in 2015, Caroline has been a presenter for the Radio 4 PM news and current affairs programme, as well as R4 From Our Own Correspondent, and World Service Radio's The World This Week.

Caroline has made several radio documentaries for BBC Radio 4 including a 2018 Analysis on UK defence spending, and The Lifecycle of a Bullet, in 2012, as well as documentaries on Europe for Correspondent and Assignment on BBC1.

She was BBC defence correspondent from 2007 to 2014, covering the conflicts in Iraq and Afghanistan, as well as the many battles within Whitehall over UK defence.

In 2014, Caroline moved from reporting on defence to covering global religious affairs, travelling across Africa, Asia, the US and the Middle East to report on the role of religion as a powerful force for both division and unity in the world.

Caroline joined the BBC in 1991 as a news and current affairs trainee.

She was born in 1967, the daughter of a British diplomat and Swiss nurse, and attended school at the Convent of the Sacred Heart in Woldingham in Surrey from 1977 to 1984, and studied at Southampton University from 1985 to 1989, achieving a 2/1 BA Honours degree in German and English. She also studied at Rutgers University in the USA. She is an alumnus of City University’s post-graduate course in journalism 1990 - 1991.

Caroline contributed chapters to 'The Oxford Handbook of War' and ‘Only Remembered’, a children’s anthology edited by Michael Morpurgo looking at the literature of WW1. She is on an advisory board at RUSI, was a Member of Council for Chatham House, and was on the board of the National Army Museum.