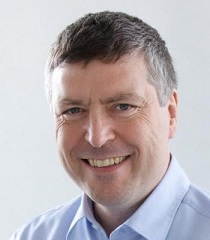 Sir Ciarán Devane joined the British Council in January 2015 as Chief Executive. In his role Ciarán has focused on ensuring that all stakeholders understand and value the contribution that soft power, cultural relations and the British Council makes to security, prosperity and influence, and that the organisation and staff are aligned behind that vision.

Prior to this, Ciarán was Chief Executive of Macmillan Cancer Support from 2007 to 2014. He transformed the scale and impact of the charity, both on its own and in collaboration with other organisations and raised its profile as an authoritative voice on cancer and on health matters, leading to Macmillan being the UK's 'Brand of the Year' in 2014.

Ciarán was educated at University College, Dublin where he gained first-class honours in biochemical engineering. He then started his career as an engineer and manager for Imperial Chemical Industries (ICI) before becoming a management consultant, mostly with Gemini Consulting. He specialised in complex change programmes with companies such as AstraZeneca and Rolls Royce.

He holds a Masters degree in International Policy and Practice from George Washington University, Washington DC and the degree of Doctor of Science honoris causa from University College Dublin. Ciarán has also held non-executive roles on the board of organisations ranging from small local charities to NHS England.

Ciarán was awarded a knighthood in 2015 for his services to cancer patients.