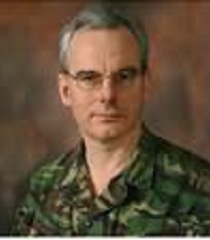 Kevin Abraham joined the Army in 1983 having read Philosophy at St Andrews University. He was commissioned into the Royal Artillery and spent the majority of his time at regimental duty serving with 1st Regiment Royal Horse Artillery, whether in Germany, Canada, UK, Kenya, Bosnia or Kosovo.

He is Honorary Colonel of the Tayforth Universities Officer Training Corps (St Andrews, Dundee, Stirling and Abertay universities) and a member of the Honourable Artillery Company, serving on its Regimental Council.

Home is in Wiltshire with wife Julia and Labrador Pip. Birding, sailing, skiing, watching rugby (Bath Rugby rather than Exeter Chiefs…) and endlessly throwing a ball for the retriever fill the weekends and holidays.