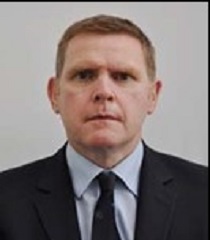 Lieutenant General Sandy Storrie was born in 1962, and commissioned into the British Army via Pembroke College, Oxford, where he gained first-class honours in English.  In his 35 years of active duty, he completed 8 operational tours, served twice with UK special forces, and was decorated four times.

His command experience included an armoured infantry company, a light infantry battalion, and the 7th Armoured Brigade - the famous "Desert Rats" -  which he led in Southern Iraq in 2008, and for which he was appointed CBE.

Staff experience included tours in the Eastern Congo with the UN, in Baghdad as Chief of Campaign Plans for MNF-I, and in Washington as the UK Liaison Officer to the US Joint Staff.  In 2011 he was appointed Assistant Chief of the Defence Staff, responsible for UK military strategy. He then served as Deputy Commandant of the Royal College of Defence Studies, where he directed the core strategy phase, and designed and ran the US/UK Rising Leaders course.

His final tour, in 2016, was a year in Afghanistan as Deputy Commander of the NATO Train, Advise and Assist mission, Operation Resolute Support.  He retired from the Army in 2017.

Since retiring, he has completed two business qualifications (with distinction), and established his own defence consultancy. He is a member of the NATO pool of senior mentors, and a non-executive Commissioner of the Forestry Commission. Despite advancing years, he still commands respect on a road bike, and has not given up on Exeter City FC.