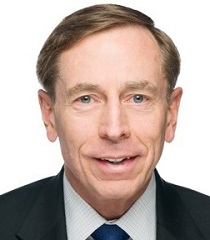 General (Ret) David H. Petraeus is the current chairman of KKR and was Director of the Central Intelligence Agency from 2011 until 2012. General Petraeus is a highly decorated general who served for 37 years in the US Military, retiring in 2011. During this time, he served as 10th Commander of US Central Command, and was commander of the International Security Assistance Force (ISAF) and US Forces Afghanistan, as well as the overseer of the coalition forces in Iraq.

General Petraeus achieved a distinction in his Bachelor degree from the United States Military Academy, before earning MPA and Ph.D. degrees in International Relations from the Woodrow Wilson School of Public and International Affairs at Princeton University.

General Petraeus has been decorated by 13 foreign countries alongside his medals and awards from the US, NATO and the United Nations.

He is a Visiting Professor of Public Policy at CUNY’s Macaulay Honors College, Judge Widney Professor at the University of California, Senior Vice-President of the Royal United Services Institute and Senior Fellow of Harvard University.