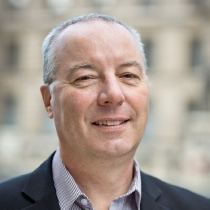 Roger Hutton joined the Ministry of Defence (MOD) as a fast streamer in 1988. He worked successively as desk officer for: Army size and shape issues; bilateral defence relations with the US, Canada, Germany (including during unification) and European neutral non-aligned countries; Army counter-terrorism operations outside Northern Ireland; and the 1992 Defence White Paper. On promotion in 1992, Roger assumed responsibility for presentational aspects of overall Defence policy, including editorship of the 1993 Defence White Paper. Following a short career break, Roger returned to the MOD in 1996 to scrutinise the validity and affordability of the naval equipment programme.

In 1999, Roger joined the Department for Culture, Media and Sport on loan, where he oversaw Exchequer and Lottery expenditure on the arts in England. 18 months later he returned to the MOD on advancement, acting as policy lead on NATO enlargement, capabilities and modernisation. Roger managed the Task Force for the NATO Prague Summit in November 2002.

Roger was promoted to the Senior Civil Service in January 2003. After short secondments in the National Health Service and the Home Office, he returned to the MOD in September 2003 to develop and manage policy on overseas military commitments (predominantly Iraq, Afghanistan and the Balkans). In October 2006 he became Head of Defence Resources and Plans, with responsibility for strategic resource allocation. From early 2009, Roger assumed responsibility for the Department’s strategic planning system, which he reformed in preparation for the 2010 Strategic Defence and Security Review (SDSR). In October 2011, Roger was promoted to take on the role of Director Defence Transformation, with responsibility for implementing Lord Levene’s Defence Reform Review, assurance of SDSR implementation and strategic planning. In April 2013, he became Director Defence Strategy, providing a Director-level focal point and implementing the Defence preparatory programme for the next SDSR. In August 2014, he became Director Corporate Strategy with a focus on strengthening the corporate agenda, particularly in those areas of behavioural change, business improvement, corporate governance and integrating analytical capabilities into the heart of the Department. Roger is also the MOD’s Digital Leader & head of profession for Business Management and Improvement. Roger has recently changed roles and is now MOD’s Director International Security, responsible for operational and security policy for the Middle East, Africa, Asia, Latin America and Australasia.

Roger has a BSc(Hons) in Physics with European Studies; an MSc in Science Policy; an MA in International Relations; and a PhD in Social and Political Science (with a thesis on UK defence policy). He speaks fluent German. He lives in South East London with his wife Karen, a medical physicist, and two daughters, Sophie (22) and Abigail (20). His interests include classical music, skiing and (as a season-ticket holder) Charlton Athletic Football Club.