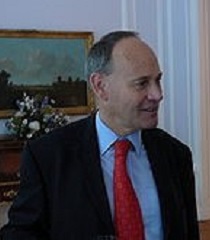 Sir Tony Brenton worked for 30 years for the Foreign Office. He first learnt Arabic and spent three years in Cairo working on the Middle East Dispute. From 1980 to 1989 he handled European matters in London and in Brussels, working on energy issues and the birth of European environment policy. Back in London he ran UN issues in the Foreign Office and took charge of preparation for the 1992 ‘Earth Summit’ which achieved the first global agreement on Climate Change. After a year at Harvard (writing a book about international environment policy – ‘The Greening of Machiavelli’) he learnt Russian and spent 1994-1998 in Moscow dealing with Russian economic reform. After a further period in London on UN matters (including the establishment of the International Criminal Court) he was posted in 2001 to Washington dealing with the consequences of 9/11, the Afghanistan war and the Iraq war. In 2004 he was posted to Moscow as Ambassador where he has had to manage Britain’s turbulent relations with Russia over the past few years.

He was awarded a KCMG in 2007. He became a Fellow of Wolfson in 2009 and is writing a book on Russian history.