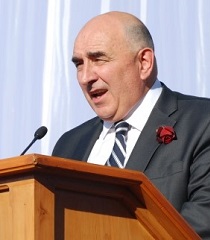 Sir William was born in Edinburgh in 1953, where he attended Trinity Academy School. He then read Modern History at the University of Dundee from 1971 to 1975.

Sir William joined the Diplomatic Service straight after graduation. After working on the Rhodesia Desk on entry to the Foreign Office, he went to the FCO's Middle East Centre for Arabic Studies in Lebanon, to study Arabic. A year later, he went to Abu Dhabi as Commercial Attaché, after which he was posted to the British Embassy in Tripoli to work in the Political Section.

After a few years in London, where he worked successively on the Libya/Syria Desk and the Iran/Iraq Desk, he was posted to Australia as Head of the Political Section at the British High Commission in Canberra.

Returning to London in 1992, he was appointed Deputy Head of United Nations Department. He then spent two years as an Overseas Inspector before being posted to Riyadh as Deputy Head of Mission and Consul General from 1995 to 1998.

On his return to London in 1998, Sir William was appointed Head of Middle East Department, where he served from 1999 to 2002. In 2002 he was appointed Ambassador to Sudan during the negotiations for a comprehensive peace agreement between the Government of Khartoum and the southern rebels (SPLA).

In June 2005 he was appointed Ambassador to Iraq and served there for 14 months, during the drafting and passing in a referendum of the new Iraqi Constitution. He left Baghdad at the end of July 2006 and until his appointment as Ambassador to Saudi Arabia in April 2007, he served as the Director of the Comprehensive Spending Review programme in the Foreign Office.

Sir William was until recently HM Ambassador to Afghanistan (May 2010 to April 2012). He recently retired from the Diplomatic Service and is now Director of WCP Consultants Limited.