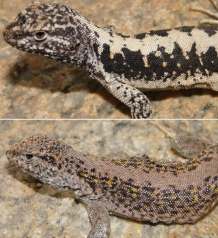 Conflict between males and females could replace evolution of new species

New research shows that males and females of the same species can evolve to be so different that they prevent other species from evolving or colonising habitats, challenging long-held theories on the way natural selection drives the evolution of biodiversity.

According to Darwin’s theory of natural selection, first introduced in his book On the Origin of Species (1859), new environments such as mountains and islands with abundant food and habitats offer species the “ecological opportunity” to colonise an area using those resources.

New research by the universities of Lincoln, Exeter and Sheffield has shown that exactly the same mechanism of evolution that creates new species also operates within the same species when males and females compete for the ecological resources available in different habitats, such as bushy areas or stony patches with abundant food.

The conflict between the sexes can lead to one sex can becoming bigger, more colourful or adapting to eat different food.

Professor Dave Hodgson, Director of the Centre for Ecology and Conservation on the University of Exeter’s Penryn Campus, said: “We know that many species have sexes that look very different from each other: peacocks and walruses are prime examples.

“This is often caused by sexual selection, but it can only happen when the environment provides the right resources to support the different sexes.

“Our research shows that when males and females evolve to be very different, they can actually find themselves competing with different species.

“This shows that the evolutionary battle between the sexes can have a direct impact on biodiversity.”

The study, which explored the evolution of lizards in the Chilean Andes and Argentinean Patagonia, found that males and females of some species have evolved to be so different that they can fill the ecological spaces usually occupied by two different species.

Dr Daniel Pincheira-Donoso, Senior Lecturer in Evolutionary Biology at the School of Life Sciences at the University of Lincoln and lead researcher on the study, said: “Our research reveals evidence for this intriguing phenomenon that the evolution of sexes within a species could replace the evolution of new species, which begins to add a new layer to our understanding of the evolution of biodiversity.

“It is important to stress that the diversity of life on our planet applies not only to the evolution of different species, but also to the independent evolution of males and females within the same species, which potentially has very important implications.”

The findings have been published in the journal Global Ecology and Biogeography.