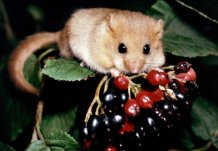 Dormouse numbers are falling in Britain – down by 72% in just over 20 years – and the scientists say this could reflect changes in climate and the composition and structure of woodland habitats.

The findings, from two new studies led by the University of Exeter, show dormice favour woodland with varied heights and areas of regrowth, including species such as hazel and yew that provide the flowers, fruits and nuts they enjoy.

The researchers call for a return to active woodland management, which can include coppicing, glade creation and small-scale tree felling, to create a “mosaic” of trees of different ages and sizes, especially areas of new growth and medium-height trees.

Dormouse numbers are higher in woodlands with more varied tree heights and scrubby areas, and they prefer to use areas of woodland edge, and dense trees and shrubs, when they move around at night.

“Habitats that we found to be good for dormice have been in decline,” said lead author Dr Cecily Goodwin, of the Environment and Sustainability Institute on the University of Exeter’s Penryn Campus in Cornwall.

“Dormouse conservation would benefit from more broadleaf woodland in the landscape and more diverse woodland structure – ranging from new growth and scrub to mid-height woodland to old trees.

Professor Robbie McDonald, who directed the research, said: “There has been a decline of woodland management that creates diverse forests, and an increase in large stands of mature, single-age trees, which are not such good habitats for dormice or various other declining woodland species, such as some birds and butterflies.”

Wildlife charity, People’s Trust for Endangered Species (PTES), has been collecting population data on hazel dormice for over 20 years. These records are collated within the National Dormouse Monitoring Programme (NDMP).

Using NDMP data from 300 sites across England and Wales (there are no dormice in Scotland), the researchers investigated hazel dormouse numbers, breeding and population trends in relation to climate, landscape, habitat and woodland management.

Nida Al-Fulaij Grants Manager at PTES said, “PTES has been working hard to understand the ecology of hazel dormice and the conservation issues they face for over twenty years. With data collected by hundreds of dedicated volunteers, this research will enable us to work closely with woodland owners to ensure a brighter future for one of Britain’s best loved animals.”

Commenting on another finding that hibernating dormice benefit from consistently cold winters, the researchers said variable winters most likely cause the sleepy rodents to waste energy by waking up only to return to hibernation. Climatic changes in Britain are likely to have contributed to dormouse declines.

Both studies were funded by the Forestry Commission and NERC, and the Mammal Review study was supported by the People’s Trust for Endangered Species.