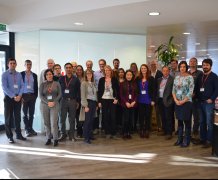 The new study will look at whether if it is possible to detect a lithium ‘fingerprint’ from space by imaging vegetation and minerals.

Experts from the Camborne School of Mines are taking part in a pioneering new study to discover whether if it is possible to detect a lithium ‘fingerprint’ from space by imaging vegetation and minerals on the ground using satellites.

The new study, led by data scientists at the Satellite Applications Catapult and funded by Innovate UK, will integrate new data with geological information to create an innovative new ‘prospectivity map’.

The map is designed to help identify indicators of geological structures which may host lithium in waters - known as brines - deep below the surface.

The study is taking place in Cornwall where there are many intriguing historical accounts of brine containing lithium, some dating back to as early as 1864.

Now that lithium has become a crucial material for the development of electric car batteries the lithium in Cornwall may represent an important resource. Additional demand is expected to come from power storage batteries that will be used to store electrical power harvested from renewable sources such as wind and solar.

Dr Robin Shail, from the Camborne School of Mines, which is based at the University of Exeter’s Penryn Campus and who is part of the study said: “Cornish Lithium Ltd has proposed an interesting model highlighting the potential for lithium brines to be hosted by steeply-inclined fault zones.

“CSM is delighted to be involved in this research and is helping to develop understanding of the extent and linkage of these fault zones and how they have controlled fluid flow in the Cornish crust over the last 300 million years.”

The study will help determine whether satellite techniques can assist in prioritising areas for exploration for the future production of lithium. Such techniques include the evaluation of geology and vegetation that might indicate the presence of structures bearing lithium-rich brines deep below the surface.

Using the data from the project, the team will also develop a visualisation tool to show how EO and geological data can be integrated to develop software that can monitor the impact of a mine throughout its lifecycle.

Cornish Lithium Ltd. is leading the search for lithium in Cornwall and the results from this project are expected to expand the company’s understanding of the geological structures which are the main targets for where lithium may be extracted from in the future.

Jeremy Wrathall, Founder & CEO, Cornish Lithium Ltd, said: “Lithium has significant strategic importance to the UK economy and we hope that the funding will accelerate understanding of the potential to extract lithium in Cornwall.

“We believe that techniques developed from this study will prove of great interest to the mining industry globally given the growing importance of Earth Observation techniques as an unobtrusive exploration tool worldwide. We look forward to taking this exciting project forward to the next stage of its development.”

Dr. Cristian Rossi, Principal EO Specialist, Satellite Applications Catapult, said: “We get to push boundaries by integrating cutting edge Earth Observation techniques with local surveys to develop the first digital maps that display the probability of occurrence of lithium in Cornwall.  Initial investigations show promising outcomes and the team is currently working on their validation.”

The project is due to have results by the end of March 2018.