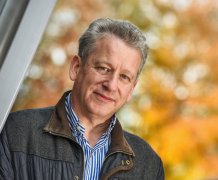 Professor Neil Gow has been appointed as the new Deputy Vice-Chancellor (Research and Impact) at the University of Exeter.

One of the world’s foremost microbiologists has been appointed as the new Deputy Vice-Chancellor (Research and Impact) at the University of Exeter.

Professor Neil Gow FRS will join Exeter from the University of Aberdeen, where he is currently Co-Director for Research at the MRC Centre for Medical Mycology in the School of Medicine, Medical Sciences and Nutrition.

He will take up his new role in September - pending formal ratification at the University’s Senate and Council – succeeding Professor Nick Talbot FRS, who is departing Exeter to be Executive Director of the Sainsbury Laboratory in Norwich.

Professor Sir Steve Smith, Vice-Chancellor and Chief Executive said: “I am absolutely delighted by the appointment of Professor Neil Gow FRS as our new Deputy Vice-Chancellor (Research and Impact).

"Neil is an outstanding, internationally renowned scientist and experienced senior academic leader, who brings with him a wealth of expertise. Neil has articulated an exciting vision for taking forward our highly successful research and impact strategy.

Professor Gow enjoys a global reputation as one of the leading academics in his field, and brings a wealth of experience to the University of Exeter.

As well as being the former President of the British Mycological Society and of ISHAM (the International Society for Human and Animal Mycology), Professor Gow also holds a Wellcome Trust Strategic Award and shares a recent Wellcome Trust Collaborative Award.

His research focuses on the fields of fungal biology and medical mycology (studying fungi that cause disease in humans and other organisms). His pioneering research centres on how the cell walls of these fungal pathogenic species are assembled, respond to antifungal antibiotics and are recognised by the human immune system.

Professor Gow said he was "truly delighted" to be joining the University of Exeter. He said: "The University of Exeter is one of the most dynamic and rapidly advancing universities in the UK. I am delighted and honoured to be trusted with this exciting role and look forward to working with my new colleagues in the coming months and years.”

“Neil is an extremely impressive scientist and senior academic leader.  He brings a wealth of expertise in research management and innovation, including his contributions to the last Research Excellence Framework.  It is very gratifying to me to be succeeded in this role by such an impressive academic leader.

"Neil has articulated an exciting vision for taking forward our highly successful research and impact strategy. He is also a world renowned fungal biologist who will further enhance Exeter’s reputation as a global centre for fungal research.”

Sir Steve added: “I’d like to thank Professor Nick Talbot FRS for his dedication, leadership and knowledge in the role of DVC since 2010.  He has led a step change in our research quality and quantity, managing a research portfolio of £280m and securing key awards and initiatives, including our successful REF2014 submission, the Humanities and Social Sciences Strategy, establishing the Living Systems Institute (LSI) and The Doctoral College. We will miss working with him and wish him all the very best at the Sainsbury Laboratory.”