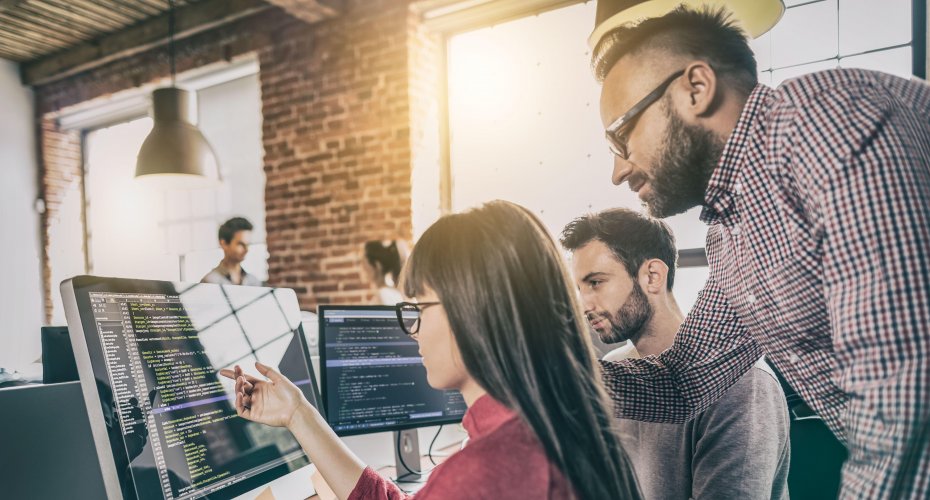 The University has created a centralised Research Software Engineering (RSE) group that will assist our research community with more complex and bespoke research software needs.

The use of research software has spread from traditional applications such as numerical methods and simulation in maths, physics and chemistry to being essential for data analysis or controlling experiments across disciplines.

RSEs work with researchers from all disciplines to gain an understanding of the problems they face, and then develop, maintain and extend software to provide the answers.

Where can I find out more?

For University of Exeter staff more information about the team, examples of what RSEs do, how to cost RSE’s on bids, along with how to transact the related costs on live projects please contact the IDSAI team.

If would like to connect with RSEs and ask questions then the Exeter RSE Slack can be found here. Please note only exeter.ac.uk email addresses have been pre-approved to join.

How can I request the time of an RSE?

If you have a research project you are working on or you are starting to write a project / grant proposal that you would like an RSE involved with then please complete and submit the information in the RSE request form here.

Omar has an MPhys from University of Warwick and a PhD in Physics from University of Southampton. As part of his PhD and later for post-doc at Ohio University, Omar developed simulations for modelling the radiation signature from accreting black holes. These simulations included physical processes such as plasma internal shocks, synchrotron radiation, Compton scattering, and electron/positron pair creation and annihilation. The radiative transfer simulations made use of both distributions-based methods and Monte Carlo. As a post-doc Omar also co-supervised graduate students and taught courses.

Omar then joined the Met Office as a Scientific Software Engineer where he was responsible for maintaining and developing the user interface to the weather model. He also worked on atmospheric and ocean model coupling. He then joined the Defence Applications team as a Senior Scientist where he was responsible for developing and maintaining Tactical Decision Aids (used by the military) that forecast the impact of weather on Infra-red sensors used by the military. As part of the TDA development project Omar carried out field trials at a US military base and regularly handled highly sensitive data. He then joined the Clouds and Radiation Group at the Met Office where he initially worked on radiative transfer modelling with the main aim of implementing a line-by-line model.

Omar’s more recent focus has been on developing machine learning models to emulate physical processes. Using deep learning frameworks (PyTorch and Tensorflow), he has created emulators for thermodynamic processes of the atmosphere. Omar has also developed emulators using both random forests and neural networks for predicting thermospheric temperature used for space weather forecasting. Omar also helped establish the Data Science Community of Practice at the Met Office and as part of this and other machine learning work has made use of cloud computing resources, specifically AWS compute instances and Sagemaker.

Freddy has a MPhys in Physics with Astrophysics and a PhD in Biophysics from the University of Exeter.

Freddy’s thesis work 'Advancing Photodynamic Therapy Treatment of Non-Melanoma Skin Cancer with Numerical Systems’ integrates a diverse range of numerical models into a single unified framework, using the simulation library arctk (https://github.com/FreddyWordingham/arctk), which he developed during the project. Several programmes, derived from the library, are published as standalone command line tools which are currently used by students and researchers at the University of Exeter.

In his free time, Freddy enjoys working on software pet projects, including his personal rendering engine (https://github.com/FreddyWordingham/antler) and a Minecraft+SPH inspired game engine, currently being developed in collaboration with members of UoE's Astrophysics department. Producing high-resolution visualisations of scientific data is a personal favourite.

Matthew has an MSc (PhD ABD) in Physics from Syracuse University and a second later MSc from the University of Glasgow in Statistics.

During his time in Syracuse LIGO group, Matthew started out working on developing calibration hardware before shifting to focus on improving signal detection pipeline software. The development products were incorporated into the Advanced LIGO project, which has successfully detected more than fifty binary black-hole mergers since 2015.

As a personal project, Matthew is working on standardizing the protocol for setting up a research computing pool of networked workstations. Using the HTCondor Software Suite along with a lightweight VM and software containers, researchers can utilize idle CPU/GPU cycles and scale their workload far larger than possible with a single machine.

In his free time, he enjoys disappearing out into the countryside in search of new gravel trails on his cyclocross bike.

During her MSci, she worked on a project in collaboration with the Royal Devon and Exeter Hospital looking into automating the identification of cancerous tumours in the head and neck, as well as the delineation of the operable region. Fliss also completed an internship at the Met Office. More specifically, she was an intern for the Analysis, Visualisation and Data (AVD) Team and contributed a new aggregator to Iris, an open source Python package for analysing and visualising meteorological and oceanographic data sets.

For her PhD, Fliss undertook interdisciplinary research with the University of Exeter Medical School’s Mental Health Research Group. The aims of the research were to investigate the use of machine learning for distinguishing between people with and without dementia, as well as differentiating between key dementia subtypes where appropriate; and to gain an understanding of the inherent structure of dementia data, to ultimately investigate disease signatures. The research prompted the development of two machine learning approaches and gave rise to what could be deemed valuable findings concerning dementia and its diagnosis.

Ricky has a M.Sc in Physics from the University of the Western Cape, and a PhD in Astronomy and Astrophysics from the Australian National University. As part of his PhD and his post-doctoral research he developed simulation software for modelling the stellar oscillations of red giant and super-giant stars. These simulations required the solution of a coupled system of PDEs and ODEs using an implicit finite difference method. The solution algorithm used implemented a N-dimensional Newton-Raphson method coupled with a large sparse matrix solver. The simulations included a turbulent convection scheme to model Reynolds stresses and energy transport by convection. He also has practical experience in astronomical observation, data collection, data reduction and cleaning, as well as statistical data analysis and modelling (e.g. uncertainty estimation using Monte Carlo methods).

He has held the outreach astronomer position at the South African Astronomical Observatory for two years before taking up a teaching and research position at the University of the Western Cape for 5 years. While in post he supervised postgraduate students and taught physics and astronomy at both undergraduate and post-graduate level.

Ricky then joined the Met Office as a Scientific Software Engineer in the Unified Model Systems team which are responsible for maintaining, and contribute to the development of, the Unified Model (UM) - the simulation software the Met Office use for numerical weather prediction and climate modelling.  In this role he contributed to developing and improving the UM test suite and build system, ensuring all new code developments are quality assured, maintaining working practices and documentation, as well as publish regular quality assured UM software releases. He also contributed towards the development of LFRic (the Met Office next generation UM replacement) finite element modelling codebase. In particular he worked on developing tools necessary to apply transformations between UM and LFRic simulated datasets, ensuring the scientific validity and quality of said transformations. Throughout his role as an SSE at the Met Office he worked closely with various stakeholders ranging from end-users and developers to scientific experts wishing to develop new functionality and software products.