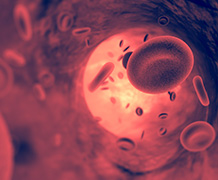 Platelets perform a crucial function in blood, including helping blood to clot, which helps us heal wounds

Blood platelet counts at the higher end of normal suggest a high risk of cancer in men aged 60 or over, and should be investigated, according to new University of Exeter research.

Platelets perform a crucial function in blood, including helping blood to clot, which helps us heal wounds. However, Exeter researchers have previously found that cancer risk is significantly raised by having an abnormally high blood platelet count (more than 400 x 109/l,) a condition known as thrombocytosis. Now, they have found that cases of cancer greatly increased in older males with a platelet count on the high end of normal range (326 to 400 x 109/l), indicating that these patients should be investigated for cancer.

In a study funded by NIHR and published in the British Journal of General Practice, researchers reviewed the records of nearly 300,000 patients who had platelet counts on the higher end using data from the Clinical Practice Research Datalink and the National Cancer Registration and Analysis Service. They found that the number of these patients diagnosed with cancer a year later was significantly higher if the patients had even slightly raised platelet levels. Of 68,181 male patients with levels of blood platelet on the higher end of normal, 1,869 cases of cancer were diagnosed within one year. Of these, 720 were an advanced stage. A higher platelet count was most frequently linked to lung and colorectal cancers – both aggressive forms of cancer.

Dr Sarah Bailey, Senior Research Fellow at the University of Exeter Medical School who led the research, said: “After finding that having a blood platelet count above normal range put people at high risk of cancer, we investigated the risk at the high end of normal. We found that men aged over 60 whose platelet count is on higher end of a normal are more likely to have an underlying cancer. Updating guidance for GPs to investigate higher platelet counts could save lives. This is particularly important in a post-COVID era; clues to help GPs identify cancer earlier are crucial to target the backlog in cancer investigation and diagnosis” Professor Willie Hamilton, of the University of Exeter Medical School, said: “The UK lags well behind other developed countries on early cancer diagnosis. Our findings on platelet count and cancer diagnosis can help to combat that lag. It is now crucial that we roll out cancer investigation of thrombocytosis. It could save hundreds of lives.”